TAG Oil's Cheal infrastructure expansion project in the Taranaki region of New Zealand has been completed. Together with TAG's existing production infrastructure and pipeline network, the Company now has the capacity to fully commercialize the successes (past and future) of its onshore Taranaki Basin assets. 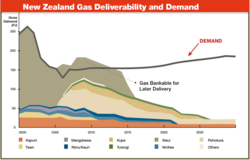 TAG Oil is poised to grow even stronger, including new opportunities to leverage our natural gas assets.

Vancouver, B.C. – April 4, 2013 – TAG Oil Ltd. (TSX: TAO) and (OTCQX: TAOIF), is pleased to report that the Company's Cheal infrastructure expansion project in the Taranaki region of New Zealand has been completed. Together with TAG's existing production infrastructure and pipeline network, the Company now has the capacity to fully commercialize the successes (past and future) of its onshore Taranaki Basin assets.

With this completed infrastructure expansion, previously shut-in wells from TAG's successful 2012 shallow drilling program are now being placed into long-term production. The Company will continue to identify areas of the new infrastructure that requires optimization, as final commissioning work continues in the coming weeks. TAG's total production capability from tested shallow wells and the new liquids potential of the expanded gas plant is in excess of 5000 barrels of oil equivalent per day.

TAG Oil CEO, Garth Johnson commented, “I congratulate our entire team who have worked tirelessly to finish this project on time and on budget and they've done so to the highest safety and environmental standards. Even more impressive is the fact that during this complex infrastructure project, the team continued our unprecedented rate of successful new well drilling in Taranaki. With control of this critical infrastructure, TAG Oil is poised to grow even stronger, including new opportunities to leverage our natural gas assets.”

One component of the Company's strategic focus on New Zealand – and a driver of the Cheal infrastructure expansion – is the high relative value of the oil and gas TAG produces. In addition to enjoying oil prices which, in February 2013, averaged CDN$30/bbl higher than West Texas Intermediate, TAG's contracted gas price (NZ$5.40/mcf) is more than double the 2012 Canadian gas price average.

In contrast to the oversupply of natural gas in North America, the Taranaki region of New Zealand is undersupplied, with further imbalance between gas supply and demand forecasted for the long term.

March 27, 2013 was a milestone day for TAG Oil as the valve connecting the newly expanded Cheal Processing Facility to New Zealand's primary natural gas transmission pipeline was opened for the first time, providing the Company the ability to market and sell Cheal gas to interested parties looking for a long-term supply of gas.

TAG's $100 million state-of-the-art infrastructure expands processing capacity with a focus on safely producing oil and gas for years to come.

The original Cheal facility, which was constructed at a cost of approximately $25 million by the previous operator, now has expanded oil processing capability, gas-liquids' extraction capabilities, and a new 11km pipeline to New Zealand’s primary gas transmission pipeline, all at an additional cost of ~$30 million. Including the Sidewinder Production Facility, TAG now controls approximately $100 million in critical infrastructure, which positions TAG as a prominent New Zealand producer with a strong competitive edge to pursue the attractive opportunities identified within the Company's Taranaki portfolio.

This expansion ensures future wells – including high deliverability gas condensate wells – can be quickly commercialized. In addition, it delivers:

“Over the coming months,” said TAG Chief Operating Officer Drew Cadenhead, “we'll be monitoring initial flush production rates and analyzing plant performance. Where necessary, we'll optimize production configuration to ensure we're operating at maximum efficiency while still following oilfield production best-practices. We're very pleased to have completed this major project slightly ahead of schedule: This was a very complex program using a variety of skills, and since we kept drilling while construction proceeded, an immense amount of planning and communication was required to insure these concurrent operations were completed safely and efficiently. Our team did a great job.”

In the East Coast Basin, TAG will explore and potentially develop the major unconventional resource potential believed to exist in the tight oil source-rock formations that are widespread over the Company's acreage. These oil-rich and naturally fractured formations have many similarities to North America's Bakken source-rock formation in the successful Williston Basin.

TAG Oil has adopted the standard of six thousand cubic feet of gas to equal one barrel of oil when converting natural gas to “BOE's”. BOEs may be misleading, particularly if used in isolation. A BOE conversion ratio of 6Mcf: 1 Bbl is based on an energy equivalency conversion method primarily applicable at the burner tip and does not represent a value equivalency at the wellhead.

Statements contained in this news release that are not historical facts are forward-looking statements that involve various risks and uncertainty affecting the business of TAG. Such statements can be generally, but not always, identified by words such as “expects”, “plans”, “anticipates”, “intends”, “estimates”, “forecasts”, “schedules”, “prepares”, “potential” and similar expressions, or that events or conditions “will”, “would”, “may”, “could” or “should” occur. These statements are based on certain factors and assumptions including:

A. All estimates and statements that describe the Company’s objectives, goals, production rates, optimization, infrastructure capacity and or future plans relating to the seismic, testing, work over and drilling programs in Taranaki are forward-looking statements under applicable securities laws and necessarily involve risks and uncertainties including, without limitation: risks associated with oil and gas exploration, development, exploitation, production, marketing and transportation, volatility of commodity prices, imprecision of reserve estimates, environmental risks, competition from other producers, and changes in the regulatory and taxation environment. These forwardlooking statements are based on certain factors and assumptions, including factors and assumptions regarding the management's views on the oil and gas potential in the Permits, well performance, the success of any operations, completing infrastructure and the costs necessary to complete the operations; and

B. Those relating to TAG Oil's exploration and development of its oil and gas properties within the Cheal and Sidewinder project areas, the production and establishment of additional production of oil and gas in accordance with TAG Oil's expectations at Cheal and Sidewinder, well performance, drilling, the completion of new infrastructure at Cheal and Sidewinder, optimization, the increase of cash flow from new production, expected growth, results of operations, performance, prospects, evaluations and opportunities. While TAG Oil considers these factors and assumptions to be reasonable based on information currently available, they may prove to be incorrect. Actual results may vary materially from the information provided in this release, and there is no representation by TAG Oil that the actual results realized in the future will be the same in whole or in part as those presented herein.

TAG Oil is involved in the exploration for and production of hydrocarbons, and its property holdings with the exception of the Cheal and Sidewinder project areas are in the grass roots or primary exploration stage. Exploration for hydrocarbons is a speculative venture necessarily involving substantial risk. There is no certainty that the expenditures incurred on TAG Oil's exploration properties will result in discoveries of commercial quantities of hydrocarbons. TAG Oil's future success in exploiting and increasing its current reserve base will depend on TAG Oil's ability to develop its current properties and on its ability to discover and acquire properties or prospects that are producing. There is no assurance that TAG Oil's future exploration and development efforts will result in the discovery or development of additional commercial accumulations of oil and natural gas.Other factors that could cause actual results to differ from those contained in the forward-looking statements are also set forth in filings that TAG and its independent evaluator have made, including TAG's most recently filed reports in Canada under National Instrument 51-101, which can be found under TAG's SEDAR profile at http://www.sedar.com.

TAG undertakes no obligation, except as otherwise required by law, to update these forwardlooking statements in the event that management's beliefs, estimates or opinions, or other factors change.