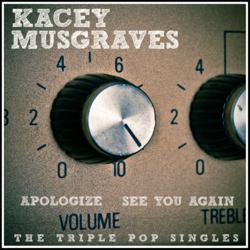 They’re just acoustic songs, but they showcase Kacey’s developing performing talent, which has now made her famous.

Recorded five years ago in 2008, the EP features Kacey Musgraves performing acoustic guitar cover versions of the songs “See You Again” and “Apologize,” a previously unreleased recording. Ms. Musgraves’ is known to sometimes perform cover songs as part of her live performances, such as “Island In the Sun” by Weezer in recent live concert appearances.

The songs were recorded at Brain Machine Recording Studios in Austin, Texas when Ms. Musgraves first got out of high school.

“They’re just acoustic songs, but they showcase Kacey’s developing performing talent, which has now made her famous. She took these songs and made them her own,” says Triple Pop rep, Joseph Mills.

Kacey Musgraves was nominated for multiple Academy of Country Music Awards, including “Vocalist of the Year" alongside Miranda Lambert, Martina McBride, Taylor Swift and Carrie Underwood.

Listen for free to the full stream of “Apologize” on Soundcloud.

About Triple Pop
Triple Pop is an independent record label based in Austin, Texas.