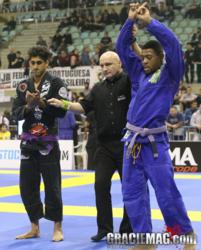 DJ Jackson, the Team Lloyd Irvin star Black belt, would claim a Bronze medal in the Black belt Male Adult Middle class. He would defeat the legendary Formiga with a wrist lock in the quarterfinals, before falling to Clark Gracie via points in the Semis.

With a fantastic showing at the Pans, look out for Team Lloyd Irvin to have more success at the oncoming IBJJF World Championships this May. Until then, there's the WPJJC in Abu Dhabi this week, the New York Open next week, Copo Podio and other tournaments.