AQS QuiltWeek™ in Lancaster a Success 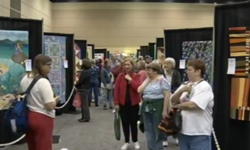 Registration in the AQS School of Quiltmaking was more than double last year.

The largest quilt and fiber art show in the Eastern United States continues to grow, while more than 16,500 attendees flocked to Lancaster, PA for AQS QuiltWeek™, March 13 – 16, 2013. Celebrating the art of quiltmaking by showcasing the masterpieces created by today’s textile artists, AQS presents quilters, fiber artists, and fabric lovers a chance to explore creativity from around the world.

Attendance at this year’s AQS QuiltWeek exceeded 2012 by 11%. Along with the new name, AQS implemented a revamped marketing campaign, with broader multi-media saturation and fully-refreshed advertising creative. Catching the attention of multiple media outlets, television crews were a constant presence during the event. With film crews from inside Lancaster, nearby Harrisburg, neighboring New Jersey, and as far away as Australia, AQS continues to raise the profile of quilting on a global stage.

Also key to 2013 AQS QuiltWeek’s success in Lancaster was the world-class collection of exhibits, vendors, and instructors. As host to the U.S. Debut of Beneath the Southern Sky, with works from four continents: the AQS Quilt Contest and Stitch Like an Egyptian, showcasing the Tentmakers of Cairo, curated by Jenny Bowker of Australia and Executive Show Director, Bonnie Browning, ensured visitors discovered international quilting at its best.

In the AQS Contest, winning artists received more than $44,000 in cash prizes from the American Quilter’s Society. Bonnie Browning also noted, “Registration in the AQS School of Quiltmaking was more than double last year.”

More than 200 merchant booths and 300 quilts filled three halls, easily making it the largest event held at the Lancaster County Convention Center. AQS Director of Show Operations, Terry Guill, ensured a smooth experience for visitors and vendors alike. In less than one day, all quilts were hung, while vendors set up the largest merchant mall for quilters in Pennsylvania. Several vendors saw higher sales than any other event across the U.S., even those in major cities with higher attendance.

Meredith Schroeder, Founder and Chairman Emeritus, was not surprised with the turnout. “We always receive so many wonderful entries in Lancaster. This year’s show might be the best collection yet!”

The American Quilter’s Society is the largest quilting membership organization in the world. For almost 30 years, AQS has been the leading voice in quilting inspiration and advice, through a broad suite of products—magazines, books, live events, contests, workshops, online networks, patterns, fabric, and catalogs. At AQS, we believe that with inspiration and advice, the creatively minded can take their quilting projects beyond what even they had imagined. That is why inspiration is central to everything we do. The leading authors in quilting choose to publish with AQS; the best in quilt artistry select AQS events to display their work; the newest quilters learn from the knowledge and inspiration of AQS members.