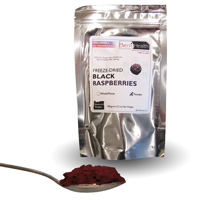 The findings reveal for the first time that black raspberry metabolites accumulate in prostate tissue, indicating that the anthocyanins were absorbed, metabolized by the liver, and transported in the blood to the prostate.

A cancer prevention research team led by Marteen Bosland, DVSc, PhD, Professor of Pathology at the University of Illinois Medical School in Chicago, investigated the effects of black raspberry powder consumption on prostate cancer. The results of the study, titled, “Inhibitory Effects of Black Raspberry Consumption on Prostate Carcinogenesis in Rats,” were presented Tuesday, April 9, at the American Association for Cancer Research Annual Meeting 2013 in Washington, DC.

The findings reveal for the first time that black raspberry metabolites accumulate in prostate tissue, indicating that the anthocyanins were absorbed, metabolized by the liver, and transported in the blood to the prostate. In a companion study, the researchers also found that ellagic acid, another major antioxidant in black raspberries, inhibited growth of human prostate cancer cells in the laboratory setting.

Although these data are promising, further research is needed to understand what effects black raspberry consumption might have in human prostate cancer subjects.

Black raspberries, not to be confused with blackberries, are almost exclusively grown in Oregon, on the west coast of the United States. They have been studied extensively because of their high concentration of certain phytonutrients and antioxidants. BerriProducts LLC, an Oregon-based company, has been supplying black raspberry products to research universities across the country for the last four years.

Located in the heart of one of the premier berry growing regions in the world in northwestern Oregon, BerriProducts LLC has been providing high-quality specialty black raspberry products for scientific research and clinical trials. They have also sold the same product direct to consumers since 2010 through their website http://www.berrihealth.com. By partnering with select Oregon farms, controlling careful and timely harvesting, quality after harvest processing, and using advanced packaging technology BerriProducts LLC insures their extensively tested products are phytonutrient rich year in and year out and that they stay that way until consumed.

More details on BerriProducts LLC and black raspberry powder can be found at http://www.berrihealth.com.