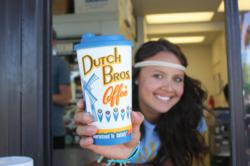 Dutch Bros. Coffee places high value on serving customers not only a great cup of coffee but an exceptional experience.

"It’s all about the people.”

For the second consecutive year, Dutch Bros. Coffee has been ranked by J.D. Power and Associates as highest in customer satisfaction in its Specialty Coffee Retailer Satisfaction Report.

Released on Apr. 4, the report found that friendly and knowledgeable staff continues to be the most important factor in pleasing customers.

“Our customers are the best, man, and so are our bro-istas,” says company co-founder Travis Boersma. “They rip and they rock, and it’s all about the people.”

Other factors in customer satisfaction include merchandise, cost, facility and promotions.

“Dutch Bros. Coffee is exceptional at creating an experience that resonates with their high-intensity customer base, which results in their very high loyalty and satisfaction ranking,” said Sally Lombardo, director of research operations at J.D. Power and Associates.

The 2013 Specialty Coffee Retailer Satisfaction Report is based on responses from more than 3,100 customers who purchased any product at a specialty coffee retailer in the 30 days prior to being surveyed.

Known for upbeat baristas and genuinely caring service, Dutch Bros. Coffee was ranked by J.D. Power and Associates as highest in customer satisfaction for two consecutive years in its 2012 and 2013 Specialty Coffee Retailer Satisfaction Reports(SM).

With a mission of, “Making a Difference, One Cup at a Time,” Dutch Bros. donates over $1 million annually to nonprofit organizations and local causes selected by local owner-operators.

Dutch Bros. Coffee is headquartered in Grants Pass, Ore., where it was founded twenty-one years ago by Dane and Travis Boersma, brothers of Dutch descent.