The Cyber-Bully's Nemesis, the Cyberhero, is Brought Out of Academia and Unveiled to the Mainstream

Last year psychologist, Dana Klisanin, Ph.D., received the Early Career Award for Scientific Achievement in Media Psychology from the American Psychological Association for her pioneering research on the “cyberhero” archetype. Now, she's bringing her research out of the academic journals to the global community in the form of an interactive game designed to encourage the rise of cyberhero behavior. 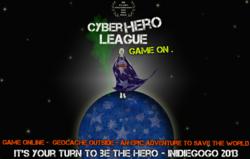 The cyberhero is the antithesis of the cyberbully. Rather than using digital technology to harm others, the cyberhero uses it to help other people, animals, and the environment.

Dr. Klisanin describes the game, "Cyberhero League," as “an interactive scout-like adventure designed to encourage the rise of cyberhero behavior in society." She explains, "The cyberhero is the antithesis of the cyberbully. Rather than using digital technology to harm others, the cyberhero uses it to help other people, animals, and the environment. The cyberhero has characteristics of heroes and superheroes. Like heroes, they take action to help people in the real world. Like superheroes, they have superpowers that arise from using the Internet, including: speed, bi-location, and shape-shifting."

The game uses the power of wireless technology to enable players to cross seamlessly between the real world and the game world. Instead of earning fake badges, players win the right to display the badges of real nonprofit organizations they've apprenticed with during game play. Game play results in the contribution of charitable items to the game's nonprofit partners. The Cyberhero League was a winner in the World Future Society’s Beta-Launch Tech competition in 2012. Right now game play will be limited to beta-testers, but anyone who wants to put on a cape and save the world through gaming can get a spot by supporting the Cyberhero League’s Indiegogo campaign. When the campaign is finished, they’ll be given their passcodes to adventure.

Interested parents, educators, and heroes/superheroes can find out more and join the world’s premier league of cyberheroes!