The world’s top coffee consumer, the United States spent $18 B last year for coffee alone. It’s a multi-billion-dollar industry that is safely tucked at home, but is it fair to the farmer? 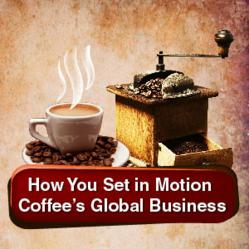 Coffee is more than just a capitalist’s playground. It has as much social as economic factors that allow the industry to thrive.

The infographic “How You Set in Motion Coffee’s Global Business” published by FinancesOnline.com presents how big the American coffee industry is by following its supply chain. Just when America is losing much of its manufacturing to Asian countries, the coffee industry provides a needed jolt to perk up the domestic economy. While the beans are imported, much of the big money, infrastructure and facilities to make coffee are invested in the United States, generating an economy that matches the GDP of a country like Bosnia. With 100 million Americans drinking coffee every day, it is easy to picture how much livelihood and businesses this industry generates.

To illustrate the scale of making coffee to ensure Americans don’t miss their morning cup, the infographic charts how coffee is made from growing the trees to roasting the beans using state-of-the-art facilities, and to stocking your favorite neighborhood coffee house with labeled brands using sophisticated delivery systems. An example of this magnitude is illustrated with one popular coffee house alone occupying more than half of Central Park if all its branches are put side by side.

But coffee is more than just a capitalist’s playground. It has as much social as economic factors that allow the industry to thrive. By highlighting the lifestyles of each player in the value chain, the infographic hopes to compare the disparity between the different players. Is coffee really a fair trade for the farmer? Just how much of the coffee dollar trickles down to the grower? Should consumers care about their plight? The infographic shows how each of us is connected to the farmer every time our sleepy heads reach for a cup of a fresh morning brew. It is a multi-billion industry for Americans, but shouldn’t it also be fair for farmers in developing countries?

More revealing and trivial details on how coffee becomes a multi-billion industry are presented in “How You Set in Motion Coffee’s Global Business” an infographic published by FinancesOnline.com.