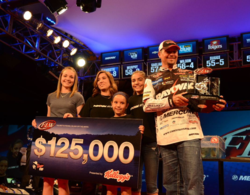 Jason Christie poses for the cameras with his family at his side in their "Rayovac Attack" t-shirts.

“My family is the reason that I do this. I go fishing so that I can support them. I enjoy it, and there is not a day that I go fishing that I take for granted."

Rayovac pro Jason Christie of Park Hill, Okla., brought a 20-pound, 4-ounce stringer to the scales Saturday – the third-largest stringer ever weighed in during FLW competition at Beaver Lake. Christie didn’t duplicate that effort Sunday, but it turns out he didn’t need to. After the final fish was weighed, Christie’s five-bass limit worth 14 pounds, 1 ounce gave him a total four-day weight of 61 pounds, 8 ounces as well as the championship trophy and $126,500 at the Walmart FLW Tour at Beaver Lake presented by Kellogg’s.

“I’ve got a little groove going right now,” said Christie, who earned his second career victory in FLW Tour competition. “If you had asked me after practice if I was going to do any good in this event, I would have said ‘no way.’ It always seems like you win tournaments when you least expect it, and I really did not expect this one.

Christie’s four-day total of 61 pounds, 8 ounces was the heaviest weight to ever win an event in FLW competition at Beaver Lake.

“My key bait this week was a Yum Yumbrella Flash Mob Jr.,” he said. “It’s a special rig. It’s more compact and has willow leaf blades on it. And, it’s tough. I used one rig and it lasted all three days. I never broke a wire or anything – it’s really the best one on the market.

“When I get in the groove, I just seem to make good decisions,” Christie continued. “Today, I really struggled. I was expecting to catch them real well, and I didn’t. I found a stretch that I hadn’t fished all week, and something just told me to pull up there. When I did, I started catching them.

“My family is the reason that I do this,” Christie went on to say. “I go fishing so that I can support them. I enjoy it, and there is not a day that I go fishing that I take for granted. This will give me some momentum, and hopefully I can carry it over into qualifying for the Forrest Wood Cup. The last few years FLW has held the Cup at deep, clear reservoirs. This year, we’re changing it up and I really want to go fish the muddy water down in Shreveport.”

The top 10 pros finished the tournament in:

Pros competed for a top award of up to $125,000 this week plus valuable points in the hope of qualifying for the 2013 Forrest Wood Cup presented by Walmart, the world championship of bass fishing. The top 35 anglers in the point standings from the six events on the 2013 Walmart FLW Tour will qualify. The 2013 Forrest Wood Cup will be in Shreveport, La., Aug. 15-18 on the Red River.

The Tour stop on Beaver Lake presented by Kellogg’s was hosted by the Rogers Convention & Visitors Bureau and was the third of six events on the Walmart FLW Tour in the 2013 season. The next Walmart FLW Tour event will be held at Lake Eufaula presented by Straight Talk and will be held May 16-19 in Eufaula, Ala. The event will be hosted by the Eufaula Barbour Chamber of Commerce and boats will launch from Lakepoint Resort State Park in Eufaula. For a complete schedule, visit FLWOutdoors.com.

Coverage of the Beaver Lake tournament will be broadcast in high-definition (HD) on NBC Sports Network when “FLW” airs May 19 from 11 a.m.-12 p.m. ET. The Emmy-nominated "FLW" television show is hosted by Jason Harper and is broadcast to more than 564 million households worldwide, making it the most widely distributed weekly outdoors-sports television show in the world.

About FLW
FLW is the industry’s premier tournament-fishing organization, providing anglers of all skill levels the opportunity to compete for millions in prize money nationwide in 2013 over the course of 220 tournaments across five tournament circuits, four of which provide an avenue to the sport’s richest payday and most coveted championship trophy – the Forrest Wood Cup. FLW tournament fishing can be seen on the Emmy-nominated “FLW" television show and is broadcast to more than 564 million households worldwide, making it the most widely distributed weekly outdoors-sports television show in the world. FLW is committed to providing a lifestyle experience that is the “Best in Fishing, On and Off the Water.” For more information about FLW visit FLWOutdoors.com and look for FLW on Twitter, Facebook, Pinterest and YouTube.