Cheap Concert Tickets announces that Selena Gomez will be touring in 2013 to promote her new album "Come & Get It." Selena Gomez presale tickets will be available beginning on Wednesday, April 17th at 10:00 a.m. local time. 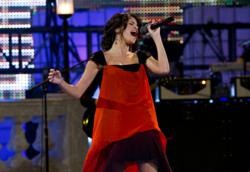 After taking a break from her music in 2011, Selena Gomez is back with a new single, a new album and a 53-city world concert tour. She released “Come & Get It” on April 8, which is part of her debut solo album slated to be released in the summer.

As the founder and lead singer of Selena Gomez & the Scene, Selena had three prior albums, which were all certified Gold. There were also three singles which were certified as Platinum. After a year's break, she is back, this time as a solo artist. She mentioned in a recent interview that she had finished recording her album and was preparing for the tour to promote it. Her tour would take her around the United States and Canada, as well as select cities in Europe.

The tour would would start in Vancouver on August 14. It would take the former Disney Channel star through 8 stops in Canada, before she proceeds to Europe. First stop will be a show at Frederiksburg on August 30. She will be spending the whole of September performing in major cities of Sweden, Norway, the Netherlands, France, the United Kingdom, Portugal, Spain, Italy and Russia before going back to the United States. She kicks off the third leg of her tour at Pittsburgh on October 10. Other stops include Boston, Brooklyn, Philadelphia, Uncasville, Buffalo, Hershey, Louisville, Nashville, Atlanta, Charlotte, Sunrise, Tampa, San Antonio, Houston, Dallas, Phoenix, Los Angeles, San Diego, Las Vegas, San Jose, Seattle, Salt Lake City, Broomfield, Kansas City, Indianapolis, Minneapolis, Rosemont, Columbus, Auburn Hills and St. Louis.

The single, album and tour brings her back to the music scene, although she will be busy with her movie career until the starts the tour. She co-starred in the recently released Spring Breakers. She is part of a movie, Gateway, which is set for release this year. She co-stars with Ethan Hawke and Jon Voight, and principal photography finished in 2012. She is also set to film Behaving Bad, a Tim Garrick movie. Aside from the tour, Selena is also scheduled to perform at the Radio Disney Music Awards on April 27.

The 20-year old Selena Gomez was born and raised in Texas, and was named after famed Tejano singer Selena. She started her career in television at the age of 7, as a cast member on Barney & Friends. She has been working on television, movies and in the recording industry ever since. She was graduated from high school via home schooling in 2010.

Cheap Concert Tickets delivers tickets to sold out concerts and events worldwide when no one else can, and they do so at discounted prices. As a member of TicketNetworkDirect, they can guarantee the delivery of Selena Gomez tickets on time for sporting events, NASCAR, NBA, NFL, and NHL. This popular ticket exchange also has cheap St. Louis concert tickets and discounted Kansas City event tickets. With CheapConcertTickets.me customer service is a priority, for more information email support(at)cheapconcerttickets(dot)me.