Gummybear International, owners of the Gummibär brand and the animated singing and dancing gummy bear character, have launched a waiting list for their new Gummibär plush toys. Those signed up on the waiting list located at http://gummibar.net and http://gummybearshop.com will be notified by email as soon as the new toys are in stock. 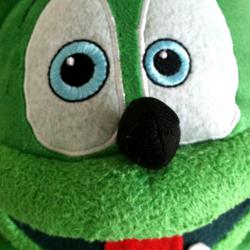 In response to popular demand about news regarding the arrival of new Gummibär plush toys, Gummybear International has created a waiting list for fans who are eager to get their hands on the new singing dolls. Fans who sign up for the official Gummibär Plush Toy Waiting List will be notified via email as soon as the new toys are available. The sign up form for the waiting list can be found on Gummibär's Official Website, http://gummibar.net and his official ecommerce shop at http://gummybearshop.com

The singing plush toys are by far Gummibär's most popular merchandise item. Unfortunately, due to an overwhelming demand during last year's holiday season, the plush toys sold out, and their web store, http://gummybearshop.com, has been out of stock on the doll since the beginning of 2013.

However, Gummybear International has been working hard to develop a new and improved version of the plush toy. The new Gummibär plush toys are a little bit bigger, hold a much better likeness to the Gummibär character and of course will still sing "The Gummy Bear Song" when you squeeze the tummy. As of now, Gummybear International estimates that the new plush toys will arrive in approximately 6 - 8 weeks.

About Gummibär:
The first Gummibär videos were posted in 2006 and since then the character has grown to be immensely popular around the world. The official YouTube channel for Gummibär today has over 1.5 billion documented views and continues to average about 2 million views every day. The Gummibär YouTube channel also ranks as the 27th most viewed musician of all-time and is the 67th most viewed channel of all-time.

The success of the Gummibär brand extends outside of YouTube too. The character’s songs have been released in over 40 different countries and in over 27 different languages. Gummibär has received Sales Certification Awards in over 8 countries, including one for going 96 times Platinum on Universal Records in Greece with its premier album “I Am A Gummybear,” despite the country’s adverse economic conditions. The musical success of Gummibär has also lead to extensive merchandising lines throughout the world, including very popular ones in Greece, Poland and France.

About Gummybear International:
Gummybear International is engaged in the creation, development, and branding of animated entertainment properties, as well as musical content based on and produced for such properties. It markets and sells recorded musical and video products in various physical formats, such as compact discs and DVDs, and digital formats, such as downloads and ringtones, through a worldwide network of established distributors and licensees. The company’s music publishing segment owns and acquires rights to musical compositions, markets these compositions, and receives royalties or fees for their use. It also is actively developing mobile and computer based games and exploiting merchandising rights for its brands in cooperation with a variety of licensing partners. GBI is working on a number of film and TV projects. The company is headquartered in New Jersey. For more information, visit the Gummybear International website at http://www.gummybearinternational.com/.