Social Security Disability & the NPR Controversy: 'Unfit for Work'? on The American Law Journal: Watch on TV this Sunday, April 21st at 5:30 p.m. and Online Now 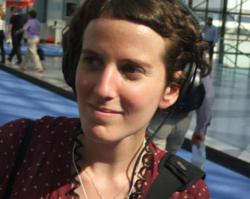 Chana Joffe-Walt. To view the "Unfit for Work" website and listen to the broadcast, go to http://apps.npr.org/unfit-for-work/

Online now and airing this Sunday at 5:30 p.m. (April 21) on the Philadelphia CNN-News affiliate WFMZ-TV, The American Law Journal presents "Social Security Disability- Unfit for Work?" examining a March 22, 2013 National Public Radio broadcast of "This American Life" that according to panelists on the program has drawn both staunch praise and heavy criticism.

Chana Joffe-Walt, the reporter responsible for the controversial March 22 broadcast "Unfit for Work- The Startling Rise of Disability in America,", asserts in the program that SSD has become the "new welfare"; that lawyer advertising has skewed the playing field; and swollen SSD rolls are the result of the growth in poor, uneducated, unskilled American workers.

Former SSA Commissioners responded to Joffe-Walt's report in an open letter stating "'Unfit for Work' failed to tell the whole story... [and] we could not sit on the sidelines and witness this one perspective on the disability programs threaten to pull the rug out from under millions of people with severe disabilities." Commissioners Kenneth Apfel, Michael Astrue, JoAnne Barnhart, Shirley Chater, Herbert Doggette, Louis Enoff, Larry Massanari and Lawrence Thompson signed the letter.

The American Law Journal can be viewed on the program's YouTube channel (search LawJournalTV) now as well as televised Sunday, April 21 at 5:30 p.m. on the Philadelphia CNN-News affiliate WFMZ-TV.

About The American Law Journal

The American Law Journal is the weekly talk-feature program hosted by former New Jersey prosecutor and trial attorney Christopher Naughton. It airs Monday nights at 7:00 p.m. and Sundays at 5:30 p.m. on the CNN-News affiliate in Philadelphia, WFMZ-TV to Pennsylvania, New Jersey, Delaware and online. On the air over twenty years, the program discusses consumer, business and Constitutional issues with attorneys, law professors, judges, elected officials and others to shed light on current legal news and how the system impacts the everyday lives of citizens.

Programs are live or taped in studio and on location in and around Philadelphia.