Motown: The Musical is off to a chart-topping start, said Felina Martinez at BuyAnySeat.com. The back story behind the 1960’s soul music hit factory is booked for an extended run at the storied Lunt-Fontanne Theatre on Broadway. 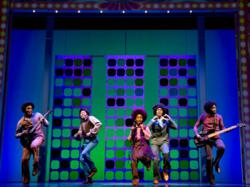 Motown became accustomed to topping the charts. Between 1961 and 1971, the Detroit hit factory had 110 Top 10 hits… thanks to artists like the Supremes, Michael Jackson, Stevie Wonder and Smokey Robinson.

Now it appears that Motown: The Musical is headed in the same direction. The production began previewing on Broadway on March 11. And, like the hits in its catalog, it continues to top the charts.

In statistics compiled by entertainment-link.com, the play’s capacity percentage once again led all other Broadway plays at 103.6 percent for the week ending April 14. The Book of Mormon, Lucky Guy and the Lion King ranked next in capacity for the period.

While Motown has led the pack through-out its previews (at 102.9 percent), official opening night was last Sunday, April 14, and attendance statistics have yet to be released.

“Search traffic for Motown remains at the top of our charts as well as Broadway’s,” said Felina Martinez at online ticket marketplace BuyAnySeat.com. “Although many of the performances begin to sell out closer to show time, we still have a great inventory of tickets available.”

“In fact, we’re proud to be able to offer theatre-goers the most complete and continuously updated selection of Motown tickets, with a worry-free guarantee to protect their purchase,” said Martinez.

“To access the listing of cheap Motown tickets we now have available, customers can go to BuyAnySeat.com and search for Motown: The Musical – then select their tickets,” said Martinez.

According to critical reviews, the musical explores the Motor City birth of the Motown sound, considered one of music’s noteworthy movements – a style of soul with a distinct pop influence.

Directed by Charles Randolph-Wright, the cast includes Brandon Victor Dixon as Berry Gordy. Dixon is a 2006 Tony Award nominee for his work in The Color Purple. Grammy-winning icon Diana Ross is played by Valisia LeKae, who made her Broadway debut in the most recent revival of Threepenny Opera.

Costume designer Emilio Sosa, with everything from casual resort wear to formal couture beaded gowns in the mix, says Motown is “one of the largest costumed shows to hit Broadway in a very long time.” There are an estimated 350 outfits, 70 percent of which are his designs, and 135 different wigs.

Then there’s the choreography by Patricia Wilcox and Warren Adams. And, of course, the soundtrack of classics from the legendary Motown catalog, including: “Get Ready,” “Shop Around,” “Where Did Our Love Go,” “What’s Going On,” “My Girl,” “Tears of a Clown,” and “Ain’t No Mountain High Enough.”

Motown, a record company combining the words `motor’ and `town’, was founded in Detroit, Michigan by Berry Gordy in 1959. Early artists included Mable John, Eddie Holland and Mary Wells with a song called "Shop Around". It was the Miracles' first Number One R&B hit and the company’s first million-selling record.

Artists on the Motown label included Diana Ross & The Supremes, The Four Tops, and The Jackson 5. Other stars such as Stevie Wonder, Marvin Gaye, The Marvelettes, and The Miracles released hits on the company’s original Tamla label.

Motown also had other labels featuring The Temptations, The Contours, and Martha and the Vandellas – as well as The Velvelettes, The Spinners, The Monitors, Chris Clark, Jr. Walker & The All Stars, Jimmy Ruffin, Shorty Long, The Originals, and Gladys Knight & the Pips.