The Producer’s Club Short Play Contest is a platform for budding playwrights. The final five plays give three performances in NYC and the first place winner, as chosen by a jury, gets a grand prize of a video package worth $2000. 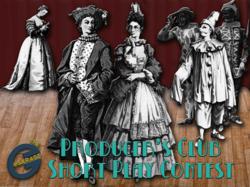 The Producer’s Club Short Play Contest is to encourage emerging writers and find original shows we can produce.

The creator of NYC Independent Film Festival and Parody 48 Hour Film Contest is introducing the Producer’s Club Short Play Contest. Dennis Cieri, the President of Cieri Media said, “The Producer’s Club Short Play Contest is to encourage emerging writers and find original shows we can produce. There are so many talented playwrights out there and this will give an opportunity for the best of them. They also win an amazing prize package of a finished professionally produced video of their play.” There is no fee to submit the play to the contest. The five best plays submitted will be selected and performed. Once accepted, a $300 refundable deposit will be required. The deposit is returned as long as 20 tickets are sold for their play in total to all three performances assigned to the show.

The submission deadline is May 10th 2013. The judges will announce their selections on May 24th and the successful writers will be notified via email. During the course of the performances, three judges will attend, one per performance, to judge the plays. Winners will be announced one week after the last performance. After all plays have had their three-performance run, the first place play will receive a $2,000.00 video package. All plays selected will be given a three-performance run at the Producer’s Club on 44th street and 9th Avenue in Midtown Manhattan, NY.

Cieri Media currently has two other ventures: the NYC Independent Film Festival and Parody 48 Hour Film Contest. NYC Independent Film Festival is a celebration of the true independent filmmaker, documentaries, short and feature-length films, music videos, and animation. Whether a submission is comedic, dramatic, or something in between, The NYC Indie Film Fest is eager to embrace fresh ideas and storytelling. The film festival aims to discover the artist filmmaker, showcasing them to the entertainment industry and the NYC public.

All NYC Indie screenings take place in the iconic center of NYC, Times Square, the perfect home for an event geared toward creating incredible opportunities for independent voices. NYC Indie Film Festival honors the best in category, which includes Best Narrative Feature, Best Documentary, Best Short Documentary, Best Short Narrative, Best Super Short, Best Music Video, as well as Best Director and Best Screenplay. The film festival is currently in its fourth year. Starting off with 48 films and 400 attendees the first year and screening 97 films to over 1000 attendees last year. You can follow them on Twitter, @nycindieff, and on Facebook, at facebook.com/nycindieff.

Parody 48 Hour Film Contest, sponsored by Sony Creative Software, is a fun competition for filmmakers that will keep them on their creative edge for two days. Participating teams get 48 hours to watch their assigned film, come up with a parody script, cast it, shoot it, edit it, lay down a soundtrack, and get us the final version on DVD. All participating filmmakers meeting all film requirements will have their films screened shortly after the contest. Attendees of the screenings will rate each film, and Audience Choice Awards will be given to the three top-rated films. These winning films will receive bragging rights and Sony Vegas video editing software. For more information, like Parody 48 Hour Film Contest on Facebook (facebook.com/Parody48Hour) and follow them on Twitter (@Parody48Hr).