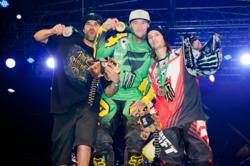 “I always come in wanting to win gold, but I also knew that some of the other guys, like Edgar [Torronteras] and Hanny [Josh Hansen] were killing it with their whips lately,” Stenberg said.

Foz do Iguacu | Monster Energy’s Jeremy “Twitch” Stenberg, widely regarded as one of the most talented freestyle motocross riders in the sport, came into X Games Foz do Iquacu looking for his third consecutive gold medal in the Best Whip competition.

Unlike other sports in the X Games, Best Whip is judged by the fans who vote via Twitter for the winner in the competition, but despite his popularity, Stenberg knew he wasn’t going to have an easy time of it.

“I always come in wanting to win gold, but I also knew that some of the other guys, like Edgar [Torronteras] and Hanny [Josh Hansen] were killing it with their whips lately,” Stenberg said.

Because the fans are the deciding factor, the only real rule in Best Whip is that the trick has to be a whip, not some other freestyle trick.

As the night unfolded, Stenberg was right about his Monster Energy teammates Torronteras and Hansen.

While Stenberg was showing his classic, smooth style, throwing a variety of whips including turn-downs and classic “pancake” style whips, Torronteras was throwing his YZ250 around with ease, repeatedly going practically upside-down and backward, looking at the crowd from underneath his Yamaha, and turning his bike around nearly 180 degrees before pulling it back around the way it came.

And then there was Hansen, showing his versatility by throwing whips in both directions, as well as throwing his own variety of turn-down whips.

In the end, Stenberg and Torronteras initially showed as tied for the win with 32-percent, but as the last of the votes came in, Stenberg was announced as the winner with 36 percent of the vote over Torronteras’s 33 percent, and Hansen in third with 20 percent.

“The fans here are really cool,” Stenberg said. “I had a really good time. It’s always a good time when you win, right?!”

After Best Whip, Hansen kept his gear on and headed over to the Step Up event, making his first-ever run at a medal in one of the gnarliest events the X Games has to offer. He was competitive, but ultimately didn’t get into the medals.

“This event is really scary,” Hansen said. “I was really scared at first, and this clay here can get really slick, so it’s hard to judge your speed. I’ve had almost no practice with this, but I felt like I was competitive. I’ll hit it harder next time because I’ll know what to expect.”