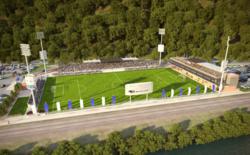 Highmark Stadium in Pittsburgh, home of the Pittsburgh Riverhounds, and one of only six FIFA 2-Star fields in the United States.

In just a week’s time, the new field at Highmark Stadium has seen its first action by the Pittsburgh Riverhounds and been certified as one of six FIFA (Fédération Internationale de Football Association) 2-Star fields in the United States.

As the world governing body of football (soccer), FIFA introduced its quality concept in 2001 to develop a recognized international standard for synthetic turf. Using natural grass as its benchmark, FIFA certifies field installations with the FIFA Quality Program that meet its very stringent quality criteria. Every product must first pass laboratory tests to determine its composition and then must be tested for durability, climatic resistance, player-to-surface interaction and ball-to-surface interaction.

Synthetic turf fields must also undergo specialized field testing in which special equipment measures how the ball reacts on the surface in terms of roll, vertical rebound and how the ball behaves when it strikes at an angle. The synthetic turf must be tested to see how it reacts to the actions of players—including shock absorbency, surface deformation, slip resistance and traction. If the field passes the laboratory and field tests, a FIFA certificate is issued with either a 1-Star or 2-Star designation.

During the fall of 2010, the Riverhounds joined the USL PRO Division created by the United Soccer Leagues.    They are the only pro soccer team in the Tri-State Area. Since established, the Riverhounds have not had an official home field and have played at CONSOL Energy Stadium in Washington, PA as well as a handful of local high schools around the area.

It wasn’t until 2012, that the decision was made to build a new $13 million, multi-sport stadium in the west parking lot of Station Square, Pittsburgh’s preeminent mixed-use entertainment complex. Anticipating over 800,000 visitors per year, the new stadium will seat 4,000 on the south and east sides of the field. It is the first-ever downtown soccer stadium and sits on the banks of the Monongahela River. It features 14 privately sponsored suites and the Starting XI Club, a full-service bar and restaurant.

“Station Square is an exceptional travel destination bringing visitors to Pittsburgh from across the country,” said Melissa Lazar, President & CEO of Highmark Stadium. “Having a well-known professional team and an elite training program will only add to the success of our community. Leading that effort will be Highmark Stadium, and its certification as a FIFA 2-Star field. We can rest assured that our Shaw Sports Turf field will perform year-after-year.”

PowerBlade Elite delivers a quality turf system designed around performance criteria that measures both athlete-surface and ball-surface interactions on the field. Made with Shaw Turf’s advanced HP+ monofilament fiber, PowerBlade Elite combines the softness and lush appearance of natural grass with the engineered effectiveness of modern synthetic turf. The gFend shock pad, installed under the turf, provides additional safety and performance benefits, including shock attenuation which can help prevent injuries from tackles, trips and falls throughout the season.

“We are extremely pleased with the FIFA testing results at Highmark Stadium,” says Chuck McClurg, Shaw Sports Turf’s Vice President of Sales. “We congratulate the Pittsburgh Riverhounds Soccer Club on the accomplishment of its new elite facility and are grateful to have a partner that appreciates quality and performance.”