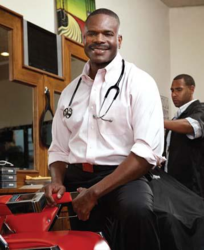 On Saturday, April 27, Dr. Bill Releford will moderate the “Living Well” panel within the Man Cave at the 13th Annual KJLH Women’s Health Forum to be held at the Los Angeles Convention Center. The Man Cave, an area just for men, will provide a variety of health screenings and panels of experts to address men’s health and wellness concerns, plus prize giveaways and free haircuts. The doors open at 7 a.m.

“The Women’s Health Forum is an important event, not just for the women of Los Angeles, but for its men as well,” says Dr. Releford. “I urge the men of our community to be leaders, and bring their wives, their mothers, and all the women they care about to get vital health screenings and learn about healthy lifestyles. Then come visit me and the other panelists in the Man Cave for frank discussions about men’s health and living well.”

The Los Angeles Convention Center is located at 1201 South Figueroa Street, Los Angeles, CA 90015. Parking for the event is in the West Hall parking area, and costs $12.