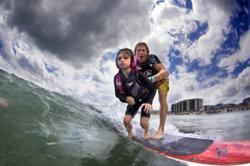 People travel from all over the country to attend our special camps.

Named as one of the World's 20 Best Surf Towns by National Geographic, Wrightsville Beach is a small surf town of 2,000 with a big heart for special needs kids and adults.

Kicking off the town's 2013 schedule of special needs surf camps on May 18 is the Christopher and Dana Reeve Foundation's Life Rolls On for people with spinal cord injuries. Camp registration is free.

This is one of the most inspiring public beach events of the year attracting dozens of participants and hundreds of volunteers including pro surfers Cory Lopez and Garrett McNamara, and Jesse Billauer, founder of Life Rolls On.

Kevin Murphy of Ocean Cure is the local director of the only North Carolina event hosted in six coastal towns from California to Florida, New Jersey and Virginia.

Rachelle Chapman, a Knightdale, North Carolina woman paralyzed from the neck down by an accident at her bachelorette party, will be one of the Wrightsville participants. Chapman's appearance is featured by Roxy.

Life Rolls On is one of many custom curriculum camps directed by Ocean Cure. Others uplift Wounded Warriors, breast cancer and HIV patients, the visually impaired, gang task force outreach and more. Because of the sensitive nature of these special groups, some camps are not posted on the schedule.

"People travel from all over the country to attend our special camps," Viorel says. The Visually Impaired Surf Camp is the most popular.

Beneficiaries of other IndoJax special camps include the Boys and Girls Club, children with juvenile diabetes, children from Belarus, an annual camp for orphan girls in India, in addition to outreach for children and families living with autism.

Families with children with autism will want to register for Surfers Healing August 19 stop in Wrightsville Beach, one of only 14 locations on the 2013 U.S. and Canadian tour. Founded in California by professional surfer Izzy Paskowitz for his son, Isaiah, who was diagnosed with autism, Izzy discovered the positive impact that surfing had on his son, and now shares this unique therapy with other children diagnosed with autism.

In September IndoJax will team up with Coastal Therapeutic Riding Program to offer a unique Surf/Horse Camp now in its second year. Held on the West Coast in Half Moon Bay, California and on the East Coast in Wrightsville Beach, the Surf/Horse Camp is inspired by Rupert Isaacson's quest to find treatment for his son's autism chronicled in the autobiography "The Horse Boy: A Father's Quest to Heal His Son."

May 18: Life Rolls On (Christopher and Dana Reeves Foundation)