Daydreaming can Make Kids Smarter says the Author of Captain Disaster, a New Novel for Middle-Graders

Writer Del Shannon pens the inspiring story of 12-year-old Kevin Tobin dealing with the aftermath of his father’s tragic death in a mountain bike accident. To escape his emotional turmoil, Kevin has developed his vivid imagination into a powerful ally, Captain Disaster. This ability to invoke his fantasy alter-ego becomes critical to his real survival. 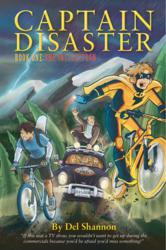 We're smothering our kids from the very thing they're the best at - unstructured play.

“Pre-publication ebook copies made available to the Boulder Valley School District in Colorado quickly became a huge favorite amongst young readers in several middle-schools,” said Daniel. “And for good reason. Selected as an in-class read-aloud book, students instantly fell in love with its fast-paced action and genuine characters.”

“But there is something else going on,“ stressed Daniel, “which isn’t being lost on kids or parents. Captain Disaster promotes creative thinking and independence. It encourages kids to tap into their own rich imaginations (instead of mind-numbing video games) to develop active and wholesome play.”

“There’s a new movement in America – finally! – which is all-about helping parents raise safe, self-reliant kids without smothering them,” agreed Captain Disaster author Del Shannon. “We’ve all become neurotic helicopter parents, hovering over our precious progeny and overbooking their daily schedule until there’s no time left for the very thing kids are the best at – make-believe play.”

“And there’s even some real science to back up this theory that daydreaming and imaginary role-playing is good for kids,” he continued, citing two recent studies published in the journals Psychological Science and Psychology Today. “Bottom line: Allowing your mind to wander increases your “working memory capacity” which in turn increases your reading comprehension, IQ score and other measures of intelligence.”

What does all this research suggest? Shannon expounded, “Collectively we’d best help our children by reopening the freedoms we have taken from them in the last 30 years because we are, quite literally, constraining their intelligence. We’ve bubble wrapped our kids and strangled their freedoms all in the name of safety, while never realizing we’re constraining their intelligence. Let them outside and give them the freedom to roam this amazing world. Instead of scolding children for staring off into the distance, seemingly in a daze, embrace the dream and let them discover their own adventures…preferably while wearing a cape and a mask.”

In Captain Disaster - Book One: The Influxitron a mysterious package arrives at Kevin’s house. Suddenly Kevin and his best friend Tony find themselves hunted down by a ruthless villain set upon world domination. After enlisting Kevin’s teenage sister and her pizza-delivery boyfriend for help, the four kids are thrown into a battle for control over time itself—out of which the secret of Kevin’s whole existence is revealed to him by a source we never expected.

Del Shannon’s imaginative story telling and his appreciation for the powers of family and the desire of kids to both escape reality and prove themselves within it make Captain Disaster a book with a wide appeal and healthy message for children and parents alike.

Captain Disaster can be found at better bookstores and is published in print and Kindle editions on Amazon, and in all ebook formats for iPad/iPhone, Nook and Kobo. To watch a book trailer, read or listen to a sample chapter, and learn about author Del Shannon please visit http://www.captaindisasterbook.com. For review copies (print or digital), and/or to interview author Del Shannon, please contact Joseph Daniel.

Story Arts Media is a transmedia company based in Boulder, Colorado that focuses on “Enlightened Book Publishing and Filmmaking.” It offers a hybrid-publishing model for select authors, along with producing its own original content on digital and print platforms.