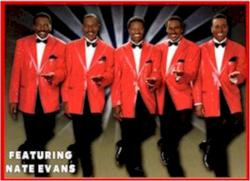 Nate Evans is the real deal.

Nate and his ensemble of 11 on stage, the same show that had a steady engagement in Pigeon Forge, TN for three years and over 750 performances plus a Las Vegas favorite has signed with talent and music agency Mark Sonder Productions.

Nate is on The Temptations Wikipedia page: "Following the death of David Ruffin, Dennis Edwards and Eddie Kendrick began touring as "The Temptations", still with David Sea and Nate Evans, and bringing in another former Temptation, [the now deceased], Damon Harris."

Linwood Peel, the nationally recogonized leader of the music of The Drifters says of Nate, "he is the real deal."

So "Get Ready" for a wonderful and interactive show for your meetings, conventions, trade shows, expositions, congresses, casinos, concert or special events by calling +1-540-636-1640 today!

The talent and music agency enjoys both exclusive and non-exclusive relationships with headliners, musicians, comedians, theatrical productions, and lecturers. TALENT BUYING: The company's almost 3 decades of contracting has given the firm the knowledge and experience to represent clients in a very strong position.

Mark Sonder Productions is a privately held company and has been delivering excellent customer service to the USA and abroad since 1985.