The 'Sirius' documentary tells the story of how Dr. Ralph Lachman of Stanford University examined the photographs, X Rays and CAT scans of the Atacama Humanoid and concluded that the six inch tall specimen is a 6-8 year old of some type. 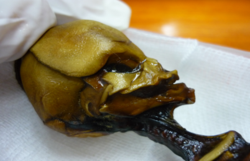 The Atacama Humanoid continues to be a mystery. As a medical doctor, it is hard to see how a 6 inch tall human, strictly speaking, could survive in the remote Atacama region of Chile and live for 6-8 years, so many decades or centuries ago

As recently reported by International Business Times,, Discovery, NBCNews and Live Science, Dr. Ralph Lachman of Stanford University, as portrayed in the 'Sirius' documentary, has examined the photographs, X Rays and CAT scans of the alleged Atacama Humanoid and has concluded that the six inch tall specimen is a 6-8 year old child of some type. Bone density and epiphyseal plate development is consistent with a child of 6-8 years of age. Only 10 ribs exist, a condition not known to occur in humans. A mature tooth is also found in the mandible.

After careful review, Dr. Lachman also states that no known skeletal dysplasia or known form of dwarfism can explain the physical findings seen in the specimen. Dr. Lachman is a recognized expert in skeletal syndromes.

An early, preliminary review of the DNA also has not found any known mutation on genes that control for dwarfism or progeria (a type of advanced aging genetic syndrome).

The genetic research is in its very early stages. Preliminary review shows DNA associated with humans, but no clear explanation for the physical findings of the specimen.

It should be noted that Neanderthals (Homo neanderthalensis) share 99.5% of their DNA with modern humans, or homo sapiens, and yet are considered a separate species or sub-species. Chimpanzees and Apes are 96-97% genetically identical to humans.

As covered in the 'Sirius' documentary, approximately 9% (or 2 million base pairs) of the DNA found in the Atacama specimen is un-matched. It is not known if this is due to computer error, so-called "junk DNA" or some other reason. Careful analysis of this 9% un-matched DNA is needed and could possibly solve the mystery. Research into the DNA is continuing at Stanford University and may take up to a year or more to complete. For this reason, it is too early to conclude anything definitive about the origins of the specimen.

Currently, the Atacama specimen, or humanoid remains an enigma. (A humanoid is defined as "... anything with uniquely human characteristics and/or adaptations, such as possessing opposable appendage (thumbs) or the ability to walk in an upright position.-Wikipedia)

Found in the Atacama desert in 2003, current research on the specimen began at Stanford University in the fall of 2012 and is continuing. It is thought to have lived decades to centuries ago, although an exact time period has yet to be determined. It is featured in the film Sirius, a documentary about UFOs and Extraterrestrial Intelligence, that premiered in Los Angeles on April 22.

Dr. Steven Greer, whose research inspired the documentary, states, "The Atacama Humanoid continues to be a mystery. As a medical doctor, it is hard to see how a 6 inch tall human, strictly speaking, could survive in the remote Atacama region of Chile and live for 6-8 years, so many decades or centuries ago. Even today, it would be nearly impossible to keep such a tiny infant alive in the best neonatal intensive care unit."