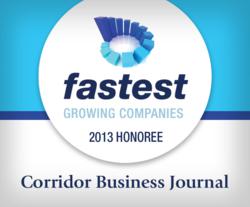 We’ve been pouring our energies into strategically growing Clickstop; it’s really an honor to be recognized by the CBJ for our efforts.

For the fifth year in a row, Clickstop will be recognized by the Corridor Business Journal (CBJ) as one of the top 25 fastest-growing businesses in the Cedar Rapids/Iowa City business corridor.

The company will learn of its rank number during an awards ceremony on May 21st at the Coralville Marriott, when the CBJ will reveal the rankings of the top 25 businesses during a breakfast meeting.

Rankings for the honor are based on continued growth revenue over a three-year period. Clickstop first made the list in 2009, ranking #4 based on revenue from 2006-2008. In 2010 the company made the list at #5, and in 2011 ranked #4. Last year the company reached its highest spot yet at #3, with a revenue growth of 199% over the prior three years. Clickstop is the only company to place in the top five for four consecutive years.

Clickstop CEO Tim Guenther, who began the start-up company in 2005 selling tie down straps on its USCargoControl.com website, said it’s rewarding to have the growth of the company recognized, particularly alongside so many other thriving corridor companies.

“We’re extremely proud to once again be among so many other notable businesses in the corridor,” said Guenther. “We’ve been pouring our energies into strategically growing Clickstop; it’s really an honor to be recognized by the CBJ for our efforts.”

Along with revenue, the Urbana-based company also expanded its space in 2012, with the completion of a 43,000 square foot warehouse addition for its US Cargo Control division. In February of this year, the company expanded its business capabilities by adding equipment to launch a department dedicated to the sewing and assembly of tie-down products on site. The company also recently added 15 new employees, and anticipates adding another 15 by the end of 2013.