Anonymous Editing on Wikipedia Keeps Morgellons Sufferers in the Dark 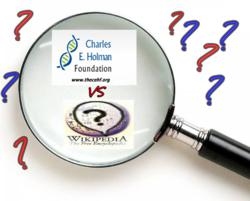 What is important to note is that only evidence suiting the current editor's agenda is allowed to stand, while opposing peer-reviewed, Pub Med index evidence is deleted. ... Marianne Middelveen

A series of important new studies provide evidence that Morgellons disease has an infectious origin which should be treatable. Yet, despite this good news, thousands of Morgellons sufferers seeking legitimate and current answers may not be reading up-to-date information.

For many Internet users Wikipedia is the first information source they will find on a given topic. Many people regard the site as being an unbiased, openly edited encyclopedia run largely by volunteers. It is viewed as a convenient resource for quick, easily understandable information and people do not question its reliability and accuracy. According to The Charles E. Holman Foundation (CEHF), what the public does not realize is that Wikipedia is posing as a genuine source of knowledge, the accuracy of their information is greatly lacking and it is vulnerable to manipulation through editing by anonymous special interest groups.

Morgellons disease is a debilitating, multisystem illness characterized by skin lesions that contain microscopic multicolored filaments. It has long been thought by mainstream medicine to be the result of self-mutilation and delusions of infestation. However, a recent series of studies have described ground-breaking DNA research linking Morgellons disease to the spirochetal bacteria, Borrelia, thus supporting an infectious etiology for the mystery malady. This research was to have brought new hope to thousands of people devastated by this illness.

For many, this hope will go unnoticed. Efforts by registered users to update Wikipedia with this important new evidence have failed. According to The CEHF an anonymous editor who goes by the name of Yobol quickly removes all new information, sometimes within minutes of the edit. The new information comes from studies published in reputable peer-reviewed medical journals that are indexed in PubMed and similar medical databases. Yet, Yobol permits theories, opinions as well as unpublished studies which apparently suit the anonymous editor’s agenda.

According to The CEFH, the name Yobol recurs repeatedly as an active editor on many Wikipedia medical topics including, but not limited to: Crohn’s disease, plantar fasciitis, Lyme disease, general medicine, vaccinations, infectious diseases, Rheumatology, chemotherapy, oncology, urology, optometry, pediatric medicine, PANDAS, and cardiology. A quick Google search reveals that many other Wikipedia editors have lodged complaints against this anonymous editor. Yobol as an individual cannot possibly be an authority on so many topics, especially within minutes of any changes being made to articles. It is highly likely that Yobol is actually a very organized group of individuals. The fact that changes to such a diverse group of topics are deleted within minutes suggests a sophisticated monitoring system with significant financial backing to flag alterations being made.

The Charles E. Holman Foundation (CEHF) is a non-profit organization dedicated to patient advocacy, research and education concerning Morgellons disease. The CEHF is demanding that Wikipedia clean up its act and allow open editing of its information about Morgellons disease. Anything less than transparent editing does a disservice to Wikipedia’s audience and discredits the website. Anonymous editors have no place in cyberspace.

The Morgellons Wikipedia page is composed of a hodgepodge of evidence, ranging from peer-reviewed published primary studies to hearsay and mere speculation. What is important to note is that only evidence suiting the current editor's agenda is allowed to stand, while opposing peer-reviewed, Pub Med index evidence is deleted. In light of the fact that Wikipedia is not a reliable source for Morgellons information, we recommend people seek current medical-scientific information elsewhere, such as Pub-Med and The CEHF Research Page.