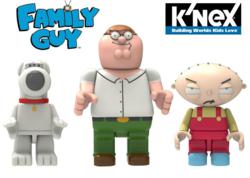 “Family Guy has a multi-generational appeal,” said Michael Araten, President & CEO of K’NEX Brands. “Our partnership with Twentieth Century Fox Consumer Products will allow building fans of all ages to bring Quahog, Rhode Island to life in a new way."

The partnership combines the award-winning K’NEX building system with the most iconic characters and elements from Family Guy, including Peter, Stewie, Brian, the Griffin Family station wagon, Stewie’s time machine and more, bringing them from the television screen to the construction aisle for the first time.

“Family Guy has a multi-generational appeal,” said Michael Araten, President & CEO of K’NEX Brands. “Our partnership with Twentieth Century Fox Consumer Products will allow building fans of all ages to bring the fictional world of Quahog, Rhode Island to life in a new and exciting way.”

Family Guy, currently in its eleventh season, has dominated television ratings and garnered enormous support amongst its fans with over fifty-two million followers on Facebook. The K’NEX Family Guy building sets will feature the quality and attention to detail for which K’NEX is known, assuring that the Family Guy buildable figures and accessories will be instantly recognizable to fans.

The new K’NEX Family Guy building sets will be available at major retailers in the Spring of 2014.

About K’NEX Brands
Founded in 1992, K’NEX Brands, the world’s most innovative construction toy company, was established to make and sell what has become one of the world’s leading integrated construction systems for children. Winner of over 250 international awards and recognitions, K’NEX is America’s building toy company focused on Building Worlds Kids Love, and encourages youngsters to “imagine, build and play.” From the living room to the classroom, K’NEX has building toys specially designed for every age group and skill level. The K’NEX family of brands includes K’NEX Building Sets, K’NEX Thrill Rides, K’NEX Education: America’s STEM building solution, Lincoln Logs®, Tinkertoy®, NASCAR®, Angry Birds™, Mario Kart Wii™, Mario Kart 7™, Super Mario™, PacMan™ and more. Since 1992, The Rodon Group, a subsidiary of K'NEX Brands, L.P., has manufactured over 31 billion parts for the K'NEX building toy system. Join us as we help build the leaders of tomorrow. For more information, please visit http://www.knex.com or http://www.rodongroup.com.

About Family Guy
FAMILY GUY follows the adventures of an endearingly ignorant dad, PETER GRIFFIN (Seth MacFarlane), and his hilariously odd family of middle-class New Englanders in Quahog, RI. LOIS (Alex Borstein) is Peter’s wife, a stay-at-home mom with no patience for her family’s antics. Then there are their kids: 18-year-old MEG (Mila Kunis) is an outcast at school and the Griffin family punching bag; 13-year-old CHRIS (Seth Green) is a socially awkward teen who doesn’t have a clue about the opposite sex; and one-year-old STEWIE (MacFarlane) is a diabolically clever baby whose burgeoning sexuality is very much a work in progress. Rounding out the Griffin household is BRIAN (MacFarlane), the family dog and a ladies man who is one step away from AA.