AncestorEbooks is thrilled that Ian Richardson's family history book God's Triangle was picked up to become a movie. 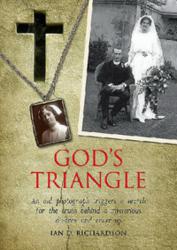 This is the cover of the book, God's Triangle.

Nothing is so soothing to our self-esteem as to find our bad traits in our forebears. It seems to absolve us. - Van Wyck Brooks

AncestorEbooks, a family history Ebook creation website, is thrilled that Family History is becoming more prevalent in movies and television.  With Ian Richardson's Family History based book, God's Triangle [godstriangle.com], being optioned by Australian film producers for a future movie AncestorEbooks is hopeful more movies about Family History and Genealogy will be considered.

Richardson's story began when he was looking at old family photographs with his mother. There was one photograph that his mother refused to talk about. The results of Richardson’s research led to a lengthy court battle to find out the family secret.

While waiting for the upcoming Australian movie, God's Triangle, there is a new television show on HBO called "Family Tree" which, according to NPR ‘Stands Tall’ [npr.org/2013/05/09/181995679/in-a-cluster-of-new-sitcoms-family-tree-stands-tall]. In one element of this new show, a man inherits a box of baubles from his dead great aunt. The show follows him in a "mockumentary" style, according to Entertainment Weekly, where Chris O’Dowd, as the lead character, follows the history of his inheritance.

Before 'Family Tree', the last Family History related television show, 'Who Do You Think You Are?' [.nbc.com/who-do-you-think-you-are/episode-guide/1/16/a-z/] followed celebrities as they discovered their own personal family history.  With the help of professional genealogists, celebrities like Sarah Jessica Parker, Gwyneth Paltrow, and Rob Lowe found out the truth behind their family legends.

"Who Do You Think You Are?" producer Lisa Kudrow said, "It's been fascinating to see the themes that emerge between who these celebrities are and their ancestry. Like for Rob Lowe, who's a huge patriot, we found that one of his earliest ancestor fought in the Revolutionary War." [hollywoodreporter.com/news/emmys-2012-lisa-kudrow-who-do-you-think-you-are-365107]

Sarah Jessica Parker's story is almost as amazing.  When she was approached to do the show, Parker hesitated, not feeling she was as 'American' as others.  According to the Huffington Post, she was pleased to discover that she had ancestors who participated in such major events as the California Gold Rush and even one great grandmother who had a warrant issued for her arrest as a witch.

The most influential family history related show is the 1979 epic, Roots, which follows the saga of an American slave family, where the finale of the series had the third highest ranking in television ever. Roots held America enthralled as they watched one family's struggles through the bonds of slavery to their post Civil War lives. [en.wikipedia.org/wiki/Roots:_The_Saga_of_an_American_Family]

Similar to the mini series, "Who Do You Think You Are?", AncestorEbooks.com shows the results of tracing a family tree and is dedicated to the telling of family histories with documents, pictures, videos, and audio files.

Gayla Mendenhall of AncestorEbooks said, "We are very dedicated to not only the correct recording of family history, but telling the family stories to go with it." Mendenhall went on to say, "We are hopeful that with the increase in the popularity of genealogy, as stated by Deseret News, stories such as 'God's Triangle' will become prevalent on television and in the movies.

"There are some wonderful books from "cozy" mysteries such as Death on the Family Tree by Patricia Sprinkles to Sugar in the Blood by Andrea Stuart that would be great additions to the world of onscreen media." concluded Mendenhall, "And I believe most families in America are ready for good clean drama."