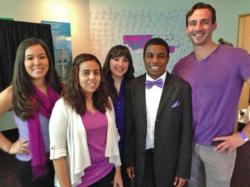 Loyola has won the Bateman Competition more than any other school in the country—a longstanding tradition we are proud to continue.

Loyola public relations students have dominated the national Bateman competition for more than a decade. In addition to winning eight national titles, Loyola’s Bateman team has advanced to the national finals 12 of the last 13 years. This year, the Loyola team beat finalists from Kent State University and North Dakota State University for the final competition held via Skype conference May 10.

“Loyola has won the Bateman Competition more than any other school in the country—a longstanding tradition we are proud to continue,” said Sonya F. Duhé, Ph.D., Loyola professor and director of the School of Mass Communication. “Our students are making a lasting impact at a national level and are making a lasting impact on our community by working with New Orleans schools to help stop the heart-breaking problem of bullying.”

“We are honored to have such a tradition of outstanding students who are so committed to public relations excellence and especially to New Orleans. Their anti-bullying campaign reached numerous students, parents and educators as well as resulted in long-standing partnerships sure to make an impact in our city,” Rogers said.

The 2013 Bateman competition focused on the rise of bullying and its short and long-term effects for the bully, the victim and even bystanders who witness bullying. Experts say bullying can lead to developmental issues, mental health disorders, sleep problems, school attendance problems and decreased academic performance.

Loyola’s “Step Up, Reach Out!” anti-bullying effort partnered with New Orleans schools and other local organizations to host 22 workshops and programs in six schools and an anti-bullying summit in February. Activities are based on the campaign’s motto “Geaux K.I.N.D.,” where each letter stands for a step against bullying: Keep others included; inform an adult when you see bullying; never bully others; and decide to be more than a bystander.

“I remain impressed by the attentiveness and seriousness that many students showed during our workshops. It was apparent that bullying exists in local schools and students were eager to do their part to stop it,” Fontenette said. “Shortly after our Step Up to Bullying Summit, a high school student reached out to us to let us know that she had already pitched her bullying prevention plan to the student council. Student-led campaigns will be critical to changing school cultures to prioritize tolerance and acceptance.”