The National Honey Board announces new research insights surrounding consumer's honey preferences. The NHB creates "The Story of Honey" to dispel myths from bee to table. 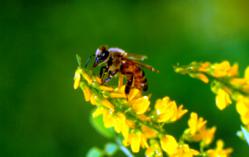 The truth is that honey is made by honey bees from the nectar of flowers and plants, not pollen," said Bruce Boynton, CEO of the National Honey Board.

With confusion swirling in the news regarding honey’s sources and authenticity recently, the National Honey Board (NHB), a federal research and promotion board with the United States Department of Agriculture (USDA) oversight, wants to clarify any misconceptions surrounding this natural sweetener.

In a 2013 Attitude and Usage (A&U) study (1) , the NHB learned that when purchasing honey, consumers prefer for honey to be brilliantly clear and golden. Consumers also responded that they are increasingly likely to prefer honey that has pollen grains filtered out. The fact is, whether there is pollen in honey or not, it’s still honey.

“There has been some confusion about honey and honey filtration,” said Bruce Boynton, CEO of the National Honey Board. “The term ‘ultrafiltration’ has been misused in association with traditional filtration methods commonly used by many U.S. honey packers, leading some consumers to believe that any honey without pollen is not real honey. The truth is that honey is made by honey bees from the nectar of flowers and plants, not pollen.”

This is one of several myths that need clarification, according to the NHB. Harvesting honey is an ancient artisanal craft that is both an art and science. The honey bees gather nectar from flowering plants, and beekeepers collect honey from the beehives. The journey from harvesting to distributing honey is multifaceted. “The bees simply collect nectar, add a few enzymes and store it in the honeycomb. But all of the color, the flavor, the aroma, the antioxidants, whatever constituents are in the honey comes from the particular flower from which the nectar was collected,” said 40-year veteran beekeeper Gene Brandi.

There are more than 300 varietals of honey, ranging greatly in flavor and appearance. After the honey is removed from the beehive and extracted by a beekeeper, it is shipped off to a honey packer, who warms the honey and removes any foreign material or residue from the beehive, often including whatever pollens may have been introduced during the extraction process.

“The filtration process that we use is a tried and true method that’s been used in the industry for more than 50 years,” said Jill Clark, Vice President of Sales and Marketing for Dutch Gold Honey, a 66-year-old family owned and operated business based in Lancaster, Pa. “We warm the honey so it flows smoothly through our filters. Our filter press looks like a large accordion with many paper filters along the way. Honey goes through the paper filters, and this removes the foreign material or the pollen and any residue from the beehive, so that by the time it’s through the filter papers, the honey is clear and ready for bottling.”

Honey is a natural product that contains just one ingredient: honey. The benefits of honey make it easily accessible for consumers to use in their daily lives. Honey is a whole food that has other uses outside of the culinary realm. As a carbohydrate, honey is a natural energy booster. With humectant properties, honey draws and retains moisture to help hydrate the skin. It is also recommended by the American Academy of Pediatrics and the World Health Organization as a natural cough suppressant in children after the age of one (2). NHB’s A&U study showed that among parents, 83 percent of current users and 75 percent of non-purchasers are likely to use honey as a cough suppressant, if suggested by their pediatrician’s office.

Dr. Ian Paul was the lead researcher of a study funded by the National Honey Board to prove honey is an effective natural cough suppressant. To learn more about the study, click here.

From May 15-29, test your honey knowledge on the NHB’s Facebook page with the chance to win prizes. The Sweet Truth Challenge sweepstakes plus “The Story of Honey” mini-documentary are available at StoryofHoney.com.

The National Honey Board is a federal research and promotion board under USDA oversight that conducts research, marketing and promotion programs to help maintain and expand markets for honey and honey products. These programs are funded by an assessment of one cent per pound on domestic and imported honey.

1. National Honey Board, Attitude & Usage Study, 2013. Phone survey of 501 households nationwide, which consisted of men and women between the ages of 21 and 74. Ketchum Global Research & Analytics designed and analyzed this phone survey, fielded by Braun Research. January 5-11, 2013. Margin of Error: +/- 4.4%

Find out more information at www.storyofhoney.com.