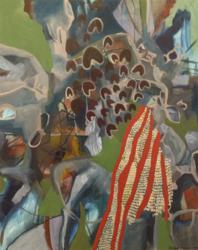 "A Shelter Out of Darkest Longing": oil on canvas by Yelizaveta Nersesova

"Lisa has adapted her process of painting and drawing into a ritual of form exploration that is absolutely captivating,” said Alan Simmons, founder and president, Alan Simmons Art + Design.

Yelizaveta (Lisa) Nersesova was born in Iran and spent her childhood in Africa. Her early teenage years were in Russia and at the age of 14, she and her family relocated to Texas. Lisa attributes her need to treat painting as a ritual due to the extensive travel and strong sense of dislocation during her formative years. Through ritual, she brings the disparate parts of herself into a cohesive whole.

With the premiere of her latest collection, Ms. Nersesova showcases abstract works focusing on color, patterns, and texture influenced by African Aboriginal conceptions.

"Lisa has adapted her process of painting and drawing into a ritual of form exploration that is absolutely captivating,” said Alan Simmons, founder and president, Alan Simmons Art + Design. “There is a dichotomy of chaos and order where free form abstractions combine with meticulously controlled detail.”

“Her submersion into other cultures, such as living in Russia and Africa, has played an enormous role in her artistic process,” added Simmons. “There has been a dramatic shift in her compositions since the show we had for her last year."

Alan Simmons Art + Design is a fine art gallery and consultancy located in the renowned Dallas Design District. The gallery is open to both the public and the trade.

Alan Simmons Art + Design provides consulting services to architects, designers, corporations, foundations, and private collectors; framing design and production for projects ranging from residences to resorts; and offers art sections and packages for all budgets, including posters, special-value framing, and quantity, among other service offerings. Alan Simmons Art + Design is strongly committed to non-profit art organizations and building enthusiasm for the arts. http://www.alansimmons.net