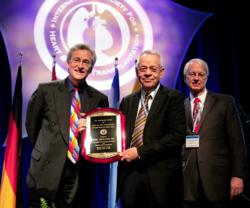 “Jack is a dynamic thinker,” said cardiologist Michael Hess, MD, co-founder and first president of ISHLT, who worked with Dr. Copeland in the early years of cardiac transplantation. “He was one of the first surgeons to arrive at the conclusion that cardiac transplantation was limited by the supply of donor hearts, and that we must begin to build on the concept of a mechanical replacement for the human heart in end-stage failure.”

Dr. Copeland, who is also a co-founder and past president of ISHLT, made medical history in 1979 when he performed Arizona’s first heart transplant. In 1985, he made headlines again when he became the first surgeon to successfully use the Jarvik 7 artificial heart to bridge a patient to a heart transplant. The first five previous implants of this artificial heart had only been for permanent use.

“Only a true pioneer with a firm mastery of the concept of mechanical heart replacement would recognize that the defunct Jarvik program and pump was worth rebuilding, redesigning and developing,” said Dr. Hess. “His team was top flight and together this group brought the Jarvik heart to the University of Arizona, went to work and developed what is known today as the SynCardia temporary Total Artificial Heart.”

Over the course of his career, Dr. Copeland has performed more than 100 implants of the Total Artificial Heart. His countless contributions to this life-saving technology include advancing surgical techniques, patient care protocols and anticoagulation (blood) management, as well as serving as the Principal Investigator for the 10-year pivotal clinical study. This study produced the highest bridge to transplant rate, 79%, of all approved mechanical circulatory support devices, and resulted in FDA approval of the Total Artificial Heart as a bridge to transplant on Oct. 15, 2004.

“In 2001, Jack, along with two colleagues, formed SynCardia Systems, Inc. to take over ownership of this technology from the University of Arizona, and in 2008, the company achieved reimbursement approval from Medicare for the Total Artificial Heart,” said Dr. Hess. “These successes have led to international acceptance and utilization of this technology - all due to the brilliance and work ethic of a single pioneer.”

After heading the cardiothoracic surgery program at the University of Arizona for 33 years, Dr. Copeland joined the faculty of UC San Diego in July 2010. Besides his pioneering work with the Total Artificial Heart, Dr. Copeland also performed Arizona's first heart-lung transplant in 1985 and the first U.S. implant of a pediatric ventricular assist device designed for newborns and small children in 2000.

The Pioneer in Transplantation Award is bestowed every other year on an ISHLT member for their landmark contributions in the field of heart and/or lung transplantation. Past winners include Christiaan Barnard, MD, Michael DeBakey, MD, and Christian Cabrol, MD.

SynCardia Systems, Inc. (Tucson, AZ) is the privately-held manufacturer of the world's first and only FDA, Health Canada and CE approved Total Artificial Heart. Originally used as a permanent replacement heart, the SynCardia Total Artificial Heart is currently approved as a bridge to transplant for people suffering from end-stage heart failure affecting both sides of the heart (biventricular failure). There have been more than 1,100 implants of the Total Artificial Heart, accounting for more than 300 patient years of life.