Intelligent Power & Light, LLC has developed a new micro generator that fits into the center bore of a wheel and generates electricity that can be used to transmit wireless information to and from car wheels. The micro generator allows the device to charge perpetually, storing the energy in a capacitor or battery to power miniature integrated electronic devices within the wheel. 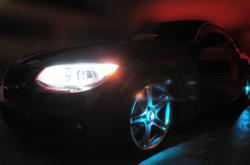 What Intelligent Power & Light (iPL) is out to prove is that the wheel can be as smart as it looks.

Good looking wheels now come with smarts. Virtually every facet of the automobile has improved over the years but the humble wheel has changed very little, save some chrome plating and a few inches here or there, but that is all about to change. What Intelligent Power & Light (iPL) (Formerly Automiq Power & Light, LLC) is out to prove is that the wheel can be as smart as it looks.

Meet the Intelligent Generator (or 'IntelliGens' TM as as the company calls it), a new series of Micro Generators that operate inside the center bore of a car wheel. The principle is simple enough, while the wheel is turning, the device is constantly generating power that is completely independent from the electrical system of the vehicle. The power is captured and stored in a rechargeable capacitor or battery for use when the wheel is not in motion. The generator is roughly the size of a plastic soda cap.

So what can this new technology do for the wheel? Being that it is independently powered, the circuitry can monitor and communicate with the vehicle (or outside device) through a wireless signal whether the vehicle is in motion or parked, even if the car battery has failed. That means tire pressure monitoring, GPS tracking, as well as new tire sensing technologies may soon have an independent source of wireless communication and power.

One of the first applications for the new technology promises to turn heads at night using a wireless remote to control the already popular Glo Ryder® Wheel Lights. Owners of the company say although the first Glo Ryder wheel lights were powered by a generator under the original patent, the generators available at the time were just not powerful enough for such a small application. The first production release of the wheel lights used AA batteries. It has taken several years to refine the generator technology to produce a powerful enough current to power the lighting circuitry at low RPM's.

For those who have never heard of it, the 'Glo Ryder' uses a universal adapter to fit into the center bore of a car wheel and lights up the logo of the center cap as well as the entire wheel with a brilliant glow at night. Earlier this year, the Glo Ryder received a new remote control that allowed the user to turn the wheel lights on off or change colors whenever they desired. The next generation of Glo Ryder wheel lights promises to do away with changing the batteries altogether.

Now that wheels can be seen at night, we imagine there will be quite a few who will want to take advantage of the device whether it is the consumer wanting to show off their wheels, or product developers for the automotive industry. In fact, the owners of iPL say they have been approached by an advertising company interested in using their wheel lighting technology and have built prototypes that light up 15" taxi wheels like billboards. The company has also been approached by a major international airport to light up the wheels of luggage carriers to make them more visible to other drivers on the tarmac at night.

Although it was primarily a device intended to showcase your wheels, iPL says a significant number of its customers have been purchasing the wheel lights to make their vehicle safer by making them more visible at night as they approach an intersection, this being primarily the BRP Spyder Can Am Roadster crowd as the front wheels easily mount the wheel lights. The owners of iPL said "We are happy to play a role in contributing to the development of the wheel whether it be by making drivers feel a little safer on the road or just making your ride a little more unique."

The company says they hope to roll out the new remote controlled, self-generating, wheel light product starting with the 'Glo Ryder 360' Wheel Light by the end of 2013. The company will start taking pre-orders late summer of this year at http://www.gloryder.com Glo Ryder Wheel Lights were first introduced at the SEMA show in Las Vegas in 2005 and won several awards for best new product. Automiq Power & Light, LLC recently changed their name to Intelligent Power & Light, LLC. The company is located in South Florida.