Let’s make ‘One World One Song’ number one on the SL8 in time for G8 UK. 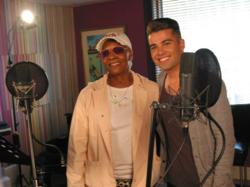 Dionne Warwick: "...it seems reasonable for us all to aim to achieve poll position in music charts around the world. If we can think it, we can do it, but only with your help. The key word here is we”.

As Prime Minister David Cameron and the UK Government take centre stage to host this year’s G8 in Northern Ireland, international trade and the global economy will be high on the agenda. If music is the ultimate global unifier, what better time than now to launch a charity Single with a difference that gets to the very heart of the issues surrounding Hunger and Poverty and how to end it.

This anthemic song, a duet between Dionne Warwick and Joe McElderry, encourages the whole world to sing with one voice to end hunger once and for all, for every individual and within every community worldwide.

“Given the importance of this challenge and the fact that in 2013 there are still two million children dying from malnutrition every year in conditions of extreme poverty, it seems reasonable for us all to aim to achieve poll position in music charts around the world. If we can think it, we can do it, but only with your help. The key word here is we”.

This unique single, entitled ‘One World One Song’, is truly a composition that comes straight from the campaigning heart of ending hunger. The single’s concept was created by The Hunger Project UK’s Country Director, Tim Holder and his team including legendary songwriter Tony Hatch (who wrote the melody) and The Hunger Project UK Patron, Rod Natkiel.

‘One World One Song’ is a duet between UN FAO Goodwill Ambassador and global singing legend, Dionne Warwick, together with UK pop icon, Joe McElderry. The inspiring voices of London Community Gospel Choir, the young musicians of Southbank Sinfonia and the 60-strong World Hunger Day Youth Choir represent diversity across all ages and backgrounds.

‘OWOS’, as the single is more affectionately known, has a digital global launch on 27th May 2013 but most importantly can be pre-ordered from 17th May. The single’s production team includes award-winning producer, Toby Alington and Orchestral Director for The 2012 Olympic Closing Ceremony, Steve Sidwell.

According to Tim Holder, UK Country Director for The Hunger Project UK:

“The launch of the OWOS single is just the beginning of this amazing journey. May 28th is the third anniversary of World Hunger Day. We are delighted to have the opportunity to join together this year with almost 200 NGO and faith group partners as part of the ‘Enough Food for Everyone IF’ Campaign. In the words of the OWOS Song and I quote…”A single voice is weak, just a whisper in the dark, but millions joined together will be heard. Let’s be heard!’...

“The Hunger Project UK calls upon the UK Government and all members of the G8, not only to ensure that they meet their own financial pledges to end Hunger but also that Aid Distribution increasingly empowers communities at grass-roots level. By doing so, these communities have the opportunity to gain skills and increase their income and food production, both vital ingredients in their journey to building their own sustainable future.

“The direct consequence of empowering those suffering from Chronic Persistent Hunger is not only a moral obligation but it makes absolute sense to the financial as well as spiritual well-being of the G8 nations (and indeed every nation). The introduction of basic skills and knowledge (that the developed world has taken for granted for decades) is one of the main steps required. Our ultimate goal will also require a shift of mindset, sound leadership and a genuine move towards gender as well as economic equality and must continue to create sustainable solutions as a priority,” added Holder.

Sally Copley, Chair of the IF Campaign, said:-

“Every 15 seconds a child dies of hunger. There is enough food for everyone, but not everyone has enough food. IF we act now, we can help begin to end this silent scandal.

“In June, the world’s most powerful leaders come together to decide the fate of millions at the G8 Summit. The decisions they make could change the future for millions of hard-working people who face a daily struggle to put food on the table. We need to make a big enough noise to get them to fix the broken food system. Buying this single ahead of the G8 is a fantastic way to send a message to leaders act to end hunger.”

The launch of OWOS will be supported by a series of intimate live London concerts and every Artist has been invited to share their own interpretation of the Song. These live up-close-and-personal events, entitled World Hunger Day Unplugged, will be hosted in Central London between 26th and 28th May 2013. Artists include Joe McElderry, Andrew Roachford, Anthony Strong, Barb Jungr, Jumoké Fashola, London Community Gospel Choir, Mari Wilson, Omar, Randolph Matthews, Simon Wallace and Tammy Weis. World Hunger Day 2013 artists are ‘Singing for Hunger’ and all parties actively urge you to do the same with ‘You Sing’ backing track.

For more information about ‘One World One Song’, World Hunger Day Unplugged and the launch of the charity single please visit http://www.worldhungerday.org

About Enough Food for Everyone IF

Enough Food for Everyone IF is a coalition of more than 180 organisations which have joined together to campaign for action by the G8 on the issue of global hunger. The last time we worked together at this scale was for Make Poverty History. Now that the G8 group of world leaders are returning to the UK, we are demanding they take action on hunger. 2013 won’t be the end of hunger, but it could be the beginning of the end. Join us at http://www.enoughfoodif.org

The Hunger Project – An Overview

Each artist will be invited to sing their own interpretation of the ‘One World One Song’ single during their Unplugged sets between 26th and 28th May 2013 inclusive, as well as their greatest songs old and new. ‘One World One Song’ better explains the determination of those endeavouring to end their own Poverty and Hunger through entrepreneurship and help from The Hunger Project UK.

'One World One Song'