Jazz Composer Steve Lindeman Debuts on CD with "The Day After Yesterday," June 11

Brigham Young University professor and jazz composer/arranger Steve Lindeman commuted from Salt Lake City to New York for three years as a member of the prestigious BMI Jazz Composers Workshop, directed by Jim McNeely. The fruits of his labor are richly apparent in "The Day After Yesterday," Lindeman's debut CD containing his distinctive compositions for modern big band. 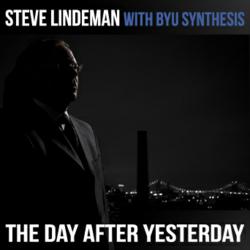 "The Day After Yesterday," Debut CD by Composer Steve Lindeman.

The pace of life is much slower here in Salt Lake City than in New York. The pastoral quality of life here is certainly reflected in my compositions--in the sustained chords, for example, and the long silences and rests.

Steve Lindeman’s distinctive approach to modern big band composing is on ample display on his impressive debut CD, "The Day After Yesterday," to be released by Jazz Hang Records on June 11. The Brigham Young University professor’s originals are performed by BYU’s Synthesis under the direction of Ray Smith, who also produced the album.

Nearly all of the compositions on the stylistically far-reaching disc had their genesis in Lindeman’s participation, from 2008 through 2011, in the BMI Jazz Composers Workshop. Commuting to New York from his Salt Lake City home twice a month during that three-year span, Lindeman impressed Workshop Director Jim McNeely with his steely commitment—and the depth of his talent. “It’s been a pleasure to know Steve and see him develop into a jazz composer with a unique voice,” says McNeely.

Offbeat sonorities and unusual instrumental combinations, episodic shifts, extended silences, and overdubbed vocal choruses are all part of Lindeman’s approach, which loses nothing in the way of swinging urgency or harmonic sweetness in embracing what Oliver Nelson called “the abstract truth.”

“I’m not a fan of traditional big band music—it doesn’t speak to me,” said Lindeman, a late bloomer at 58 whose music reflects an early love for rock artists such as the Beatles, the Doors, and Stevie Wonder, as well as jazz-rock pioneer Chick Corea, whose use of the Fender Rhodes electric piano “opened a door” for him as a keyboardist and composer.

In McNeely, distinguished pianist and composer-in-residence with the Vanguard Orchestra, Lindeman found a kindred spirit. “He was always encouraging experimentation, thinking outside the box, challenging the status quo, while respecting and tipping our hat to the lineage of Gil Evans, Manny Albam, and Bob Brookmeyer,” Lindeman said. The rich diversity of sounds at the BMI Workshop “pushed me in a new direction.”

Synthesis, recipients of DownBeat magazine’s “Top University Jazz Big Band in the Country” award in 2013, have performed extensively on festival and concert hall stages around the world and since 2006 have recorded several albums under their own name, most recently "Flyin’ High" (2011).

CD producer Dr. Ray Smith has been Professor of Saxophone in the Brigham Young University School of Music for over 30 years; he is also the school’s Director of Jazz Studies. A member of the BYU faculty jazz quintet Q’d Up (as is Lindeman) and the Utah Saxophone Quartet, Smith is a multi-reed virtuoso who appears as a guest soloist on "The Day After Yesterday."

Steve Lindeman grew up in Columbus, Indiana (50 minutes south of Indianapolis) and earned his undergraduate degree at Indiana University, where his teachers included David Baker. He acquired a master’s in music theory from Queens College and a Ph.D. in theory and history from Rutgers. Before joining the music faculty at BYU in 1996, Lindeman lived on the East Coast for 20 years, “surviving” musically as a freelance pianist while studying with such distinguished artists as Ronnie Mathews, Kenny Barron, Barry Harris, and Israeli Tamir Hendelman. He started out composing for small ensembles, and thanks to BYU, which funded his trips to the BMI Workshop as well as the recording of "The Day After Yesterday," he has attained his dream of becoming a full-fledged jazz large ensemble artist.

Lindeman’s musical outlook has been strongly shaped by the Salt Lake City lifestyle and the natural beauty that surrounds him there. “The pace of life is much slower here than in New York,” he said. “Looking across the salt flats, which I’ve done a lot with all my commuting, you can’t help but absorb the pastoral quality of life out here. That is certainly reflected in my compositions—in the sustained chords, for example, and the long silences and rests.”

Steve Lindeman and Synthesis will be performing a CD release concert on Saturday 6/15, 7:30 pm, at the Varsity Theatre, Wilkinson Center, Brigham Young University in Provo. Lindeman will be appearing with Synthesis on Hammond B-3 organ, and conducting part of the concert.