The life and times of revolutionary 17th-century healer Nicholas Culpeper are explored by master herbalists William Morris and Lisa Allen on this week's episode of the Dead Astrologers Society. The show, hosted by Donna Woodwell, airs live on Thursday, May 23, 2013, at 7 pm Eastern/4 pm Pacific on ParaManiaRadio.com. 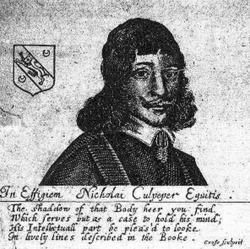 Nicholas Culpeper was a visionary who wanted healthcare to be available to everyone, including those who couldn't afford it. What he did is as important today as it was 400 years ago.

A healer who promotes locally grown herbs as a remedy for illness, and writes in a language accessible to the public so they can heal themselves. Sound like a modern-day medical revolutionary? It was 17th-century healer and master herbalist Nicolas Culpeper.

"Nicholas Culpeper was a visionary who wanted healthcare to be available to everyone, including those who couldn't afford it," says William Morris, author, acupuncturist and herbalist who has studied Culpeper's methods for more than 30 years. "What he did is as important today as it was 400 years ago,"

The life and times of Nicholas Culpeper, healer, herbalist and astrologer, is the topic of the upcoming episode of the Dead Astologers Society internet radio show, hosted by Donna Woodwell and featuring guests William Morris and Lisa Allen.

"Before Culpeper, a comprehensive list of remedies for illnesses was only available in Latin to an educated elite. And many of these prescriptions were for substances that were expensive, imported or even toxic," explains Morris. "Culpeper also wrote his medical books in English, the first time such works were available in the common language of the general public."

"Culpeper wanted people to have the power to take care of themselves," Morris says. "He was an early hero of 'peoples' medicine."

In Culpeper's time, medicine and astrology were practiced hand in hand. Culpeper also created sophisticated classification systems to that healers could more easily integrate astrology with diagnosis and treatment of ailments.

"In ancient times, doctors and healers of all cultures practiced astrology to help the sick regain a healthy balance," says Lisa Allen, astrologer and master herbalist. "The links between plants and stars are so profound, and can help promote healing on such deep levels; it’s a mystery to me why this foundational knowledge was discontinued."

The Dead Astrologers Society airs live Thursdays at 7 pm Eastern/4 pm Pacific on the ParaMania Radio Network. The show is also available on demand via iTunes.

"Our guests on the Dead Astrologers Society explore the myriad ways star wisdom has fired our imaginations over the centuries," says Woodwell. "From the ancient Babylonians and Greeks, from China to Central America, from the Renaissance to today, we continue to look up in wonder, yearning for connection and meaning."

ParaMania Radio was founded in 2011 by Jenny Stewart and David Erickson. "We wanted a place that offered diversity in a positive place for anyone who seeks knowledge of anything metaphysically based," says Stewart. "Our motto has always been 'Shining the light on the Paranormal' and we're pleased to see our vision made manifest."

Change-catalyst Donna Woodwell lives in Austin, Texas. An astrologer, hypnotist and writer, she works with clients to creatively navigate life's transitions. Owner of Four Moons Astrology, she serves on the board of the International Society for Astrological Research and as an instructor at Kepler College. Her blog La Vita Luna: Living Gracefully in a Changing World is featured on Astrology.com.