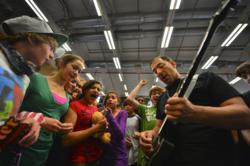 So far, my USO tour has been more than I ever could have imagined," said Marks. "I have met so many wonderful people and learned so much about our nation’s military....

Accomplished musician and Traveling Guitar Foundation (TGF) founder Damon Marks celebrates our nation’s service heroes by spreading the sound of music to troops and their families on a USO tour to Germany. In Europe to boost troop morale and remind military families the USO is always by their side, Marks is spending a week with the USO talking to troops and their families, and performing songs off his new album “Back To Good.” He is being joined by fellow musicians Oz Fox, guitarist for the Christian rock band Stryper, Allen Steelgrave and Patrick Stone of the band Steelgrave, and R&B artist Derek McKeith.

Attributed to Traveling Guitar Foundation founder/guitarist Damon Marks:
“So far, my USO tour has been more than I ever could have imagined. I have met so many wonderful people and learned so much about our nation’s military. Perhaps the greatest take away has been that no matter what you do or how much you give, no gift is too great or too small for our nation’s heroes. I am so glad I came and I can’t wait to go back out again.”

About the USO
The USO lifts the spirits of America’s troops and their families millions of times each year at hundreds of places worldwide. We provide a touch of home through centers at airports and military bases in the U.S. and abroad, top quality entertainment and innovative programs and services. We also provide critical support to those who need us most, including forward-deployed troops, military families, wounded warriors and families of the fallen. The USO is a private, non-profit organization, not a government agency. Our programs and services are made possible by the American people, support of our corporate partners and the dedication of our volunteers and staff.