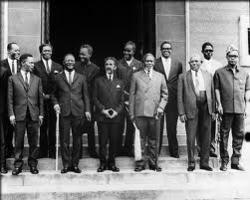 Emperor Haile Selassie at Eastern Heads of State Confence in Kampala Uganda in 1967.

On the eve of the inauguration of the African Union’s (AU) 50th Anniversary Celebrations in Addis Ababa on March 21, 2013, Ethiopian President Girma sent a letter to the Ethiopian Prime Minister recommending that, “a statue must be erected to commemorate the Emperor who was the first leader of Africa-- I think he deserves a statue.”

President Girma's letter was clearly referring to the AU and the Ethiopian government’s continued failure to recognize Emperor Haile Selassie I’s contributions to the OAU which resulted in numerous Petitions being launch on the internet.

International scholars and historians found President Girma's actions "refreshing" and "a welcomed change from the previous Ethiopian administration who had denied Emperor Haile Selassie I his rightful place in the history of the Pan African Movement and the OAU, for years".

The issue first began last year when the Ethiopian government and the AU inaugurated its newly constructed Headquarters in Addis Ababa with the erection of a statue, front-center, dedicated to Ghanaian President Kwame Nkrumah, for his contributions to African Unity, while Ethiopian King of Kings, Emperor Haile Selassie I’s pivotal contributions to African Unity and His significant role as the single unifying force behind the establishment of the OAU, along with his title as "The first leader of Africa", was ignored.

For those who are unaware, it was Emperor Haile Selassie I, not President Nkrumah, who called and hosted the May 25, 1963 Conference of African Heads of State in Addis Ababa; and it was His Majesty’s electrifying speech that inspired two conflicting political groups (Casablanca and Monrovia) to lay aside their differences, come together, and establish an organization that would unite all of Africa, which they did:

At the end of the speech, all 32 African leaders and founding fathers of the OAU elected Emperor Haile Selassie I the first President of the OAU; and unanimously voted Him, “Father of African Unity".

Eric Nickerson, former Mayor of Dixmoor, Illinois and member of the Queen of Sheba Research Foundation noted, “just as no one can deny Dr. Nkrumah's role in the Pan-African Movement, no one should deny Emperor Haile Selassie I’s pivotal role in the establishment of the OAU, and those who continue to do so make the spirit of pan-African unity nothing more than an aberration.”

Historians from Queen of Sheba Foundation believe, that by correcting it's past historical errors and omissions, the Ethiopian government would demonstrate to the world that the Federal Democratic Republic of Ethiopia supports the truth of history even though it may not always identify with it.