Nate Evans, Former Singer of The Temptations, Teams with Linwood Peel’s Stars from The Drifters for This Summer's Best Double-Bill Tour

Mark Sonder Productions, Inc., a leading music entertainment agency, is proud to announce the team of Nate Evans, former Temptations singer, with his Temptations Revue and Linwood Peel’s Stars from The Drifters for their 2013 summer tour. 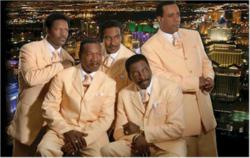 Not since The Doobie Brothers teamed up with Chicago has a notable double bill been conceived. This celebrated show is represented by the award winning music agency Mark Sonder Productions, Inc.

Mark Sonder, MM, CSEP and The Chief Entertainment Officer at the award winning music and talent agency Mark Sonder Productions, Inc., is proud to announce the best double-bill in the touring music industry today - the combination of The Temptations Revue: A Tribute featuring Nate Evans with Linwood Peel's Stars from The Drifters.

These five and four-piece vocal groups, respectively, backed by a live eight-piece orchestra, are now available throughout the U.S.A. and internationally for public concerts, casino work, corporate and association meetings, conventions and collegiate bookings.

The Drifters Million Sellers: "Stand by Me," "This Magic Moment," "Save the Last Dance For Me," "Up On the Roof," "On Broadway," and "Under the Boardwalk," amongst others.

Never before have these two bands performed on the same stage at one time. Not since the Doobie Brothers teamed up with Chicago has a notable double bill been conceived.

According to Wikipedia, "Ruffin, Kendrick & Edwards: The most well-known [Temptations] splinter was 'Ruffin, Kendrick(s) & Edwards: Former Leads of the Temptations,' which featured the three former Temptations and three other members, David Sea, who'd been a consideration to replace Edwards in 1984, Nate Evans, a former member of The Impressions, and a female vocalist."

2013 is The Diamond Anniversary of The Drifters. They are regarded as one of early Rock and Roll’s super groups and charted with various mega hits. Rolling Stone Magazine ranks the Drifters number 81 on their 100 greatest artists of all time. The Drifters have been inducted into both The Rock and Roll and the Vocal Group Halls of Fame and over the years have been fronted by memorable singers such as Clyde McPhatter, Ben E. King and Bill Pinkney. Linwood Peel and his group are regarded as the nation's #1 tribute to The Drifters.

The talent agency enjoys both exclusive and non-exclusive relationships with headliners, musicians, comedians, theatrical productions, and lecturers. Talent Buying: The company's almost three decades of contracting has given the firm the knowledge and experience to represent clients and end users in a very strong position.

Mark Sonder Productions is a privately held company and has been proudly delivering excellent customer service to the U.S.A. and abroad since 1985.