"An American in the Basement" Author, "POW Hunter," Available for Interviews in DC and VA

"An American in the Basement" is the story of the betrayal of Captain Scott Speicher and the cover-up of his death according to author Amy Water Yarsinke. Amy will be speaking in Washington, DC and available for media from June 9-22. 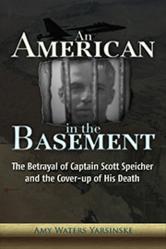 This book bares the truth in a way that Washington has actively tried to prevent.

Available for Interview in Washington, DC and Virginia

What: “An American in the Basement”, an investigation into what happens to Americans Missing in Action and/or Prisoners of War, framed by the real-life story of Captain Scott Speicher.

When: Preferred for in person interview: Between June 9 and 22 in Washington, DC or Virginia area. Available by phone any time.

**Will be keynote speaker June 14 and 15 at National Alliance of Families Forum in Washington, DC, an organization for the return of America’s Missing Servicemen since World War II to present day.**

Author Amy Water Yarsinke, a veteran author of more than 55 non-fiction books on American history, military and current affairs, is known as “the POW Hunter” due to her experience in military intelligence.

An American in the Basement is an expose about the betrayal of Captain Scott Speicher and the cover-up of his death, according to the author. The author Amy Yarsinke warns that this story is for every parent, family member or enlisted person about the promises made by the U.S. Forces to search, locate, assist and recover all alive prisoners of war and missing in action.

“The public has been shielded from the ugly truth of the Speicher case and others like it,” said Ms. Yarsinke. “This book bares the truth in a way that Washington has actively tried to prevent.”

The story of navy captain Michael Scott Speicher begins when he became the first American service man shot down in the 1991 Iraqi conflict. The book documents what happened, from beginning to end, with new documentation and eyewitness accounts that confirm Speicher was alive and captured during that war, but “forgotten” and left to behind to die. The book also examines in great detail the war of words used by the armed services to define those it will bring home, and those it will choose to ignore.

To schedule an interview or receive a copy of the book, contact Kris Millegan, Trineday Publishing (800) 556-2012.