Jackson Christian Students Harness Power of One to Give More than $14,470

An Israel Houghton song, “Power of One,” sparked an idea that that led preschool students through high school seniors to give more than $14,470 by harnessing the power of one dollar and one person at a time. 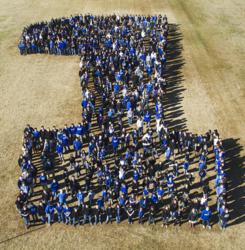 The concept was easy to embrace — to look at how blessed we are and then share our blessings with others.

An Israel Houghton song, “Power of One,” sparked an idea that that led preschool students through high school seniors to give more than $14,470 by harnessing the power of one person and one dollar at a time. The 10-month project culminated in a school-wide celebration in May, when students at Jackson Christian School welcomed representatives from nonprofits whose missions ranged from fighting cancer to providing hippotherapy for children with special needs.

Jackson Christian Director of Advancement Chris Ramey said he was listening to the radio in the summer of 2012 when Houghton's “Power of One” began playing. The song led to the idea of challenging students to raise funds for those in need. “The song asks if it depends on each of us to change the world. As Christians, we know the answer to that question is yes. Christ calls us to be servants — spiritually and physically,” explained Ramey.

At the beginning of the school year Ramey challenged the student body to bring a dollar each month with the goal of collecting $1,000 each for different nonprofits. He also challenged the students to look for opportunities to serve any physical needs the organizations had. JCS senior Kati Yenawine took the challenge to heart in March when she coordinated Jackson's first pageant for special needs individuals, the Daughters of Job Pageant. Yenawine said, “The concept was easy to embrace — to look at how blessed we are and then share our blessings with others.”

More than 52 contestants from a few months to 50 years in age participated in the Daughters of Job Pageant. It raised funds for Special Needs Athletics, an organization that provides athletic opportunities for those with special needs. “It was amazing to see the effect this event had on everyone involved. You could see the emotion wash over the audience as each contestant walked out,” said Ramey. The evening brought in more than $1,800; when added to the student body’s donations, SNA received more than $3,000.

Students also coordinated a living blue ribbon in April to celebrate National Child Abuse Prevention Awareness Month. The ribbon consisted of more than 80 students who formed a ribbon and lit candles to honor the survivors of child abuse and remember those who have lost lives due to abuse. The JCS Concert Choir performed "Prayer of the Children" by American composer Kurt Bestor at the community event. After the event and their own donations, Jackson Christian students presented $1,330 to the Exchange Club-Carl Perkins Center for the Prevention of Child Abuse.

Additional events included collecting food and household items for the Tennessee Children's Home, bringing the residents of a local women’s and children’s shelter to the school's Christmas Concert to meet Santa and receive Christmas presents, and a t-shirt sale to raise funds for breast cancer research in honor of survivor and JCS teacher Ashley Warrington.

Eight nonprofits were served throughout the school year. “Each month the students were excited to see the fruits of their efforts. As each check was presented, the next month’s organization was revealed. That announcement renewed excitement among the student body each month,” stated Ramey.

The nonprofits and results of student efforts are listed below:
Reinbow Riding Academy - $1,150
American Cancer Society - $3,000
Tennessee Children’s Home - $853 + more than 1,000 household items
The Dream Center - $3,520
Regional Interfaith Association- $580 + more than 755 lbs of food
The Boys and Girls Club of Jackson - $966 (28 children sponsored for one year through this donation)
Special Needs Athletics - $3070
Exchange Club-Carl Perkins Center for the Prevention of Child Abuse - $1,330

Jackson Christian is a private Christian school in Jackson, Tenn., offering preschool through high school classes. Jackson Christian's mission is to lead students to love God by providing the opportunity for a quality, values-oriented education in a Christian environment. More information is available at http://www.jcseagles.org/.