From South Korea and China to Turkey and Mexico, schools, education ministries, and language institutes across the globe are increasingly requiring that newly hired foreign English teachers hold a TEFL certification, according to The International TEFL Academy in Chicago. 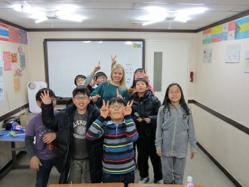 You do not need prior teaching experience to teach English abroad, but schools around the world in Europe, Latin America, Asia, and the Middle East do want to see that you’ve been trained

From South Korea and China to Turkey and Mexico, schools, education ministries and language institutes across the globe are increasingly requiring that newly hired foreign English teachers hold a TEFL certification according to Chicago-based International TEFL Academy, a world leader in TEFL (teaching English as a foreign language) certification courses for teaching English abroad.

“It’s not like the old days, when any English speaker could expect to get hired off the street as an English abroad,” said Bruce Jones, President of International TEFL Academy. “Schools and recruiters around the world have learned the hard way in many cases that just because somebody speaks English, doesn’t mean they can teach English and handle the responsibilities of teaching up to 30 hours a week in a classroom setting.”

“Even schools in major Asian countries for teaching English abroad, like China and South Korea, where it was common to hire American English teachers with no training, now require that new teachers hold a TEFL certification,” Jones said.

According to Jim Althans, Director of Recruitment at Gold Star TEFL Recruitment, a major international recruiter for English teaching jobs in China, “for most areas in China a TEFL certificate is required.”

China is the largest job market in the world for teaching English abroad as an estimated 300 million Chinese are now studying English according for former Chinese Premier, Wen Jiabao.

"A few years ago, all you needed was a college degree - if anything," Perling said. "Now that more people are applying, many recruiters also require at least some ESL (English as a second language) training."

According to Jones, International TEFL Academy has experienced record enrollments in 2013 for TEFL training classes in part because new college graduates are realizing that while facing a difficult job market at home, teaching English abroad provides tens of thousands of viable job opportunities abroad.

“But receiving training in the form of a TEFL certification course is key,” Jones added. “You do not need prior teaching experience to teach English abroad, but schools around the world in Europe, Latin America, Asia and the Middle East do want to see that you’ve been trained.”

“We’ve also enrolled many students in places like the United Arab Emirates, South Korea and China, who are already teaching professionally, but have been told by their schools that they need to take a TEFL certification course or they will lose their jobs and/or their work visas.”

“For me, I wanted to get a designation or a certification that was recognizable,” said International TEFL Academy graduate, Tommy Joiner, 26, in a video interview about his experiences taking a TEFL certification. Joiner, a native of Carbondale, CO, who is now teaching English in South Korea, added, “It was really important for me to get a course that was accredited, internationally recognizable and that provided me with the support I was looking for.”

Request a brochure or call 773-634-9900 to learn more about teaching English abroad and TEFL Certification around the world.

International TEFL Academy (ITA) is a world leader in training and certifying English speakers to teach English abroad. Based in Chicago, IL, ITA trains more than 1,200 English teachers annually and offers internationally accredited TEFL TESOL certification courses online and in 25 locations around the world. All students and graduates receive lifetime job search guidance and graduates are currently employed as teachers in more than 50 nations in Europe, Asia, Latin America and the Middle East.