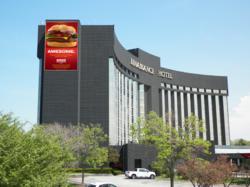 “With the addition of this digital landmark St. Louis will become reminiscent of other major cities with similar digital displays like Las Vegas,” said Kirgin.

The Arch used to be the landmark to welcoming people into the city but a new landmark is on the horizon. The Renaissance St. Louis Airport Hotel will be installing a 47 by 25 foot, video capable, high definition display facing east bound traffic on highway 70.

The display for the Renaissance St. Louis Airport Hotel will be installed on the side of the building in late September. The Renaissance display will be easy to see for drivers and clearly seen from the airport terminals and runway.

“In addition to a few hundred thousand guests per year, the video merchandiser will be located in a direct sight line of thousands of cars that travel I-70 daily,” said Renaissance St. Louis Airport Hotel general manager, Michael Sanders.

The Renaissance St. Louis Airport hotel is located in an area of the city that sees an abundance of consumer traffic, from people coming in and out of the airport to people who commute to the city driving this route every day. Last year Lambert airport saw an average of 7,116 passenger departures with almost 3.9 million total passengers so far this year. For drivers the Display will have a 60 second read time and will have 712,365 eyes on impressions (EOI) a week. EOI is the number of people who actually notice the display, not just the number of people passing by.

This display is brought to the city by a partnership between RBX Media, Anchor Communications and the Renaissance St. Louis Airport Hotel. Anchor communication will be placing advertisers on the on-premise display; they have represented advertisers and placed their ads in St. Louis for over 20 years.

RBX Media is comprised of experts in finance, hospitality, and out of home media. They also specialize in experiential marketing. The idea of experiential marketing is to have consumers get the full experience of products or services by incorporating them into something that the consumer is doing. By using, sampling and learning about the products or services the consumer gets a better experience and introduced to what you’re offering all at once. This method is one that will be utilized at the Renaissance St. Louis Airport Hotel.

The Renaissance has 12 floors with a total of 37,000 square feet of meeting space including 28 meeting rooms. Companies such as Boeing , Emerson Electric, and Express Scripts have held meetings in the hotel's meeting space. The Renaissance also has 374 rooms, 19 suites and shuttle services to St. Louis Lambert International Airport.

“I am excited to be adding this magnificent high definition video merchandiser to our hotel. The digital experience will allow businesses to advertise products that meet the desires of the AAA Four Diamond Renaissance St. Louis Airport guests,” said Sanders.