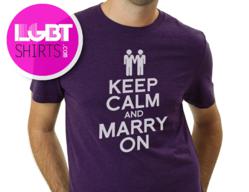 Keep Calm and Marry On T-shirt - Available in multiple colors and sizes from LGBTshirts.com

LGBTshirts.com is an online retailer that designs and sells sharp-tongued apparel for the LGBT community, including a wide variety of t-shirts, bumper stickers, posters, buttons, and cards.

The crowds of LGBT Americans celebrating Gay Pride in June will have one thing on their minds this summer: The U.S. Supreme Court's ruling on Same-Sex marriages. And as Gay Pride festivals and parades enter their peak season around the nation, the court could very well announce their landmark decision at a time for the LGBT community to rejoice in fanfare and fashion.

For those LGBT supporters, parade goers, and festival fanatics, the political buzz surrounding gay marriage makes it just the right time for everyone to make their own personal statement.

Anderson is a proud supporter of marriage equality and will be traveling to Los Angeles Pride Fest wearing his "Love is Love" T-shirt he purchased from LGBTshirts.com. LGBTshirts.com is an online retailer that designs and sells sharp-tongued apparel for the LGBT community, including a wide variety of t-shirts bumper stickers, posters, buttons, and cards.

"June 2013 will be a historical month for the gay community, and there couldn't be a better time or place to say what you're thinking on a T-shirt." says and Kyle Sigmunds, of LGBTshirts.com. "Whatever political statement you want to make, we can print it in every color of the rainbow."

"It's pathetic that a country called 'land of the free' doesn't have equal marriage rights," says Rachael Dawson, of Mesquite, TX. "Americans should be leading the way and not getting left behind."

From marriage equality to anti-bullying, some of the most topical t-shirts sold by LGBTshirts.com are bound to be worn on the streets of San Francisco, New York, and Chicago this summer. A few notable designs include: "Keep Calm and Marry On," "Ban Assault Weapons Not Gay Marriage," and "I Didn't Choose to be Gay. I just got Lucky."

If political rhetoric isn't your cup of tea, the site also sells humorous t-shirts, t-shirts for singles, t-shirts for couples, and products with every pride theme.

"There's something for every lesbian, gay, bisexual, transsexual, queer, intersex, and even heterosexual friend at LGBTshirts.com," says Sigmunds. "Our Pride 2013 apparel gets everyone's attention."

If you plan to celebrate Gay Pride Month, here is a list of notable city pride event dates:

Love is Love T-shirt from www.LgbtShirts.com

I'm a person T-shirt from www.LgbtShirts.com

I didn't choose to be gay T-shirt from www.LgbtShirts.com

Keep Calm and Marry On T-shirt from www.LgbtShirts.com

I was born gay were you born hateful T-shirt from www.LgbtShirts.com

It takes two straight people to make one gay person T-shirt from www.LgbtShirts.com