Hunter Gardner's debut novel School, to be released by Bitingduck Press in Spring 2014, combines fast-paced storytelling with exciting new e-book features. For e-readers that support such features, the book will include color illustrations and original music scores by local artists. 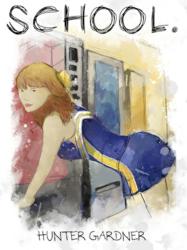 For young adults and older ones who remember

School, a novel for young adults and older ones who remember what it’s like, will be released by Bitingduck Press on March 1, 2014. The story follows Lucas and his best friend Jake who decide to start dealing drugs at their private high school in Wilson, a suburban town in North Carolina. The teenage economists soon recruit two more salesmen—a stoic British transplant nicknamed The Poet and a football player with a heart of gold, Tyler Beason. Their business grows, but so too do the stakes, as they find themselves surrounded by unforeseen competition and the insistent school administration.

The author is debut novelist Hunter Gardner of Charleston, SC. Inspired by the Southern storytelling of Ron Rash and the youth culture in novels such as A Clockwork Orange and Trainspotting, Gardner began working on the book in the summer of 2010. The novel is carried by the strong narrative voice of Lucas, as he must resolve his feelings of friendship, money, and love.

“What happens in the story is not necessarily what typically happens in high school—at least not to such extremes,” Gardner says, “but it is how high school feels. The stakes are high, reputations and gossip matter. I think of it like a comic book with dynamic heroes and villains—and not always being sure of who is which.”

School will be published as a paperback and a traditional e-book. Gardner and the team at Bitingduck are also working towards production of an enhanced e-book with special features appropriate to the next generation of e-readers. These features will include full-color illustrations and music, with the soundtrack featuring artists primarily from Raleigh—the closest metropolis to Wilson— as well as five original tracks that Gardner will produce in the summer of 2013.

Book reviewers and members of the press may obtain advance review copies of the book on NetGalley or by contacting Bitingduck Press directly. Bitingduck Press is an independent press based in Los Angeles and Montreal. Founded by two scientists, it specializes in fiction and narrative non-fiction by and about scientists. The press has two major themes for 2014-15: Young Adult and Hard Sci-Fi. Submissions are still open for the Hard Sci-Fi category; both novels and short story collections are welcome. Submissions guidelines are found on the press's website.