Earthone Entertainment, LLC releases Star Kids, a new kids video game app. that debuts as the first superhero game that allows kids of any age to simulate flight in real 3D, but even parents will enjoy the challenging missions. 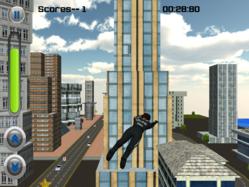 "My first idea was to just make a Superhero flight simulator that even a one-year-old could use by pretending to fly with their arms out and tilting the device."

After almost two years of development, Earthone Entertainment, LLC, has released the first ever 3D superhero flying simulation and video game app. called Star Kids on iTunes today. "I was starting to wonder if we would ever be able get the superheroes to change directions when you tilted the device in the same predicted flying pattern you would expect if you really could fly," said Rick Swartzburg, Earthone Entertainment's head of game development. Making it feel like you are really flying is exactly what started Rick on the path of developing the game in the first place. "Ever since my son was young enough to watch videos and movies like Superman, he constantly pretended to fly, so as a game enthusiast, I wondered why there wasn't any video games that made use of device tilting accelerometer functionality that would actually simulate flight in a realistic way," he added.

That realism was eventually able to be achieved, but along with it came an unexpected addition. "My first idea was to just make a Superhero flight simulator that even a one-year-old could use by pretending to fly with their arms out and tilting the device. However, my son got older during the years it took to produce the app. So, when my partners suggested that we turn this into an actual arcade type game, I knew it would take much longer and cost more, but I had to agree that it seemed like it would make it appeal to a much broader audience." The resulting game still has a practice mode that can even be used by a toddler, as it only requires holding the device, while the flight path loops over and over again to keep little ones occupied for many minutes at a time. However, their are now four different missions that are quite challenging to complete for both older kids and adults alike. The actual working game title became Star Kids – Real 3D Flight To Save The Planet and you can download it on iTunes by going to: https://itunes.apple.com/us/app/star-kids-superhero-real-3d/id648238842?ls=1&mt=8. Which audience age level Star Kids will most appeal to is anybody’s guess at this point, but either way their may be some very thankful parents able to carry on a conversation with another adult, while their little ones happily hone their flying skills needed for next time they are called on to save the world.

Earthone Entertianment, LLC was founded for the purpose of producing games and entertainment that the whole family can enjoy. For more information, you can visit StarKidsRock.com. Inquires can be emailed to contact(at)starkidsrock(dot)com. The Star Kids superhero video game app can be purchased at iTunes for only $.99 today.