Obscure Xbox, iPad and Samsung S4 Trends in May’s Gadget Recycling Round up Statistics From CompareMyMobile.com

Data from trade in price aggregator CompareMyMobile.com shows some interesting shifts in gadget recycling in May 2013 led by high profile announcements. 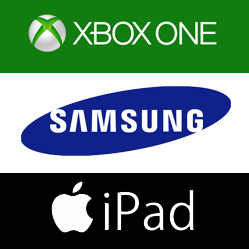 Samsung, Xbox and the iPad have seen unusual trade-in shifts this month

Check out the infographic data here.

Following the booming success of Galaxy S4 sales, Samsung continued to eat into the trade-in market share throughout May, according to leading mobile phone recycling comparison site CompareMyMobile.com. Samsung now hold 16.1% of the market, compared to BlackBerry’s 18.1% share and Apple’s lead with 40.4%. This reflects the massive success of the Galaxy S4, which recently passed the 10 million unit sales mark.

Trade-ins of the Galaxy S2 and S3 have both increased again by 3.2% and 3% respectively as people upgrade to the most recent handset.

But it isn't just the existing Galaxy range which are proving to be popular trade-ins. According to site data, the Samsung Galaxy S4 has entered the list of top 20 phones being traded in for the first time. This shows that people are selling and upgrading to different devices already – despite it only being released in April. Could the widely reported storage issues with the phone be causing people to sell?

CompareMyMobile.com reported a similar trend with the iPhone 5 last month, as it hit the top 10 most traded list, actually peaking at the #1 position for 3 days in May.

Top 6 phones being traded-in in the last 30 days:

It seems that people who aren't entirely happy with their phones are trading in now while the values of the devices are still high.

Phones continue to be the most traded-in gadget on CompareMyMobile.com but there have been noticeable differences in other device categories.

Apple’s iPad has seen a rise in trade-ins shortly after rumours began to circulate about a possible redesigned full-sized iPad and iPad Mini later in the year.

Games consoles have also seen an unusual rise in trade-in value following the announcement of the new Xbox One last month. Values across the brands have increased by 18.79% since May, as recyclers encourage gamers to sell on their old consoles.

Founded in 2009, CompareMyMobile.com is the UK's #1 source for independent mobile phone, tablet, sat nav, laptop, iPad, iPod and games console recycling price comparison. It delivers customers confidence in making the difficult decision of where to recycle their old phone safely and for the most money. CompareMyMobile is 100% impartial, comparing prices from more than 40 recycling stores.