Revenue of the Superman Industry Through the Ages Compared in a New Infographic by FinancesOnline.com

In light of the release of the new Superman flick Man of Steel, FinancesOnline.com has created a vibrant new infographic comparing the financial successes of Superman as an industry since the 1930s. From movie revenue to impressive comic book sales, this infographic covers the most financially successful parts of Superman’s career. 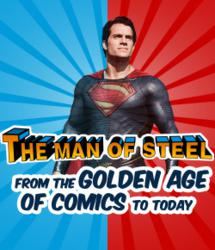 This infographic explores the dynamic nature of success within the Superman industry, just in time for the release of the new multimillion dollar production of Man of Steel.

Both lifelong Superman fanatics and new fans alike will appreciate this vibrant new infographic The Man of Steel: From the Golden Age of Comics to Today which compares the revenue of popular Superman movies and comic books from FinancesOnline.com. The authors also included little-known non-finance related fun facts.

This infographic explores the dynamic nature of success within the Superman industry, just in time for the release of the new multimillion dollar production of Man of Steel. With such a successful silver screen career it’s easy to overlook the financial success of Superman as a comic, but FinancesOnline.com has also included the numbers behind some of the most successful comic book sales as well.

Pending the release of Man of Steel, FinancesOnline.com starts out by comparing the most successful films of the Superman genre prior to the new release: Superman, Superman II, Superman III, Superman IV, and Superman Returns. In addition to comparing money spent on the respective film productions with US gross, each film fact is accompanied by fun graphics of the hero himself.

Keeping in mind that Superman comics make far less money than the movies, the author of infographic next compares the highest grossing comic books since 2009 with the highest grossing publication of all time—and the difference is surprising! For comparison, FinancesOnline.com goes on to compare the highest grossing years in the history of Superman’s existence as a comic book superhero. The author tops off the infographic with several fun facts about Superman that are sure to expand the knowledge of even the most well-versed Man of Steel fanatics such as the ture meaning of letter S on Superman's chest or the wildly popular issue in which Sueperman dies.

The Man of Steel: From the Golden Age of Comics to Today is a fun infographic full of new information for any reader interested the upcoming release of Man of Steel and/or the history of the Superman industry. Complemented by original images of Superman and vibrant images, comic book covers, and creative design this infographic succeeds in creating a fun financial timeline of this super-industry.

The full “Man of Steel: From the Golden Age of Comics to Today” is available at FinancesOnline.com