The North America Office of Duesseldorf Tourism and Duesseldorf Airport Announces: Three Ballet Pieces in One Show - “b.16” at Opera House Duesseldorf

Jerome Robbins’ classic “Afternoon of a Faun,” Hans van Manen’s “Without Words,” and world premier “Nacht umstellt” (night surrounded) by Martin Schläpfer are the pieces featured in “b.16,” one of the highlights of this ballet season at Düsseldorf’s Opera House. 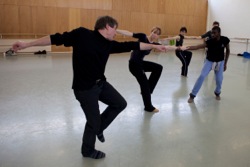 It is rare to see Jerome Robbins performed on a European stage.

Ballet lovers will be treated to an evening of dazzling variety with performances of ballet classics and new interpretations when b.16 opens on July 5 at the Opera House Düsseldorf for several performances that month. Three pieces are included in the 2.5-hour show.

Afternoon of a Faun
Jerome Robbins’ choreography set to Claude Debussy’s music “Prélude à l’après-midi d’un faun,” is a classic, and Robbins was a master at combining classical ballet and Broadway, high art and commercial entertainment. Still, it is rare to see Robbins performed on a European stage, and the inclusion of this piece - the story of a sleeping faun awakened by a ballerina on a sunny afternoon – makes “b.16” even more special.

Without Words
Choreographer Hans van Manen creates his most powerful work around one archetypical theme, the encounter of man and woman. “Without Words” is no exception: A woman meets three different men, but remains composed and unto herself, and the outcome of the encounters remains uncertain. The piece is based on the music of Hugo Wolfs’ four “Mignon-Songs” from 1888.

For more information and to purchase tickets, visit http://www.ballettamrhein.de

The city’s tourism office is offering hotel and city specials for many of the city’s art-related events throughout 2013, including “b.16.” The travel package called “Düsseldorf à la Card” can be booked right from the tourism office’s website at http://www.duesseldorf-tourismus.de/en/hotel-packages/duesseldorf-a-la-card/. Prices start at €49 per night per person based on double-occupancy for a 2-3 star hotel in the city center and at €95 per person for a 4-5 star hotel. All packages include breakfast, a Düsseldorf Welcome Card (free public transportation within city limits, plus more than 40 free or reduced admissions to city attractions), and a city information package.
###