New Report from BCC Research Forecasts the Global Market for Alzheimer’s Disease to Decline to $9.5 Billion by 2017

According to BCC Research’s report, Alzheimer's Disease Therapeutics and Diagnostics: Global Markets, the global market for Alzheimer’s disease reached $10.2 billion in 2012, and is expected to decrease at a compound annual growth rate (CAGR) of -1.5% to reach $9.5 billion in 2017. 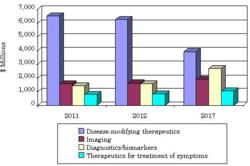 Every second a new person in the United Stated develops Alzheimer’s disease. This astonishing statistic has become a reality for the 5.4 million Americans now living with this debilitating neurological disease.

With the percentage of adults over the age of 65 expected to grow worldwide over the next 40 years, the incidence of Alzheimer’s disease is expected to more than double, jumping from 21 million cases in 2010 to 53 million in 2050.

This exponential increase in the expected number of patients presenting with Alzheimer’s disease not only represents a major area of unmet medical need, it represents a significant market opportunity for therapeutics and diagnostics as there is currently no fully effective method of treating the disease.

While the BCC Research forecast for Alzheimer’s disease shows an upward trend in most segments, the expirations of some key disease-modifying therapeutics including Aricept, Exelon, and Namenda and the introduction of generic alternatives for these drugs is expected to flatten the market.

Apart from the introduction of Aricept 15 years ago, there have been no major advancements in disease-modifying therapies. The market is just waiting for the next big innovation in Alzheimer’s disease treatment and management.

According to BCC Research’s report, Alzheimer's Disease Therapeutics and Diagnostics: Global Markets, the global market for Alzheimer’s disease reached $10.2 billion in 2012, and is expected to decrease at a compound annual growth rate (CAGR) of -1.5% to reach $9.5 billion in 2017.

The market segment expected to see the most growth is Diagnostics and Biomarkers.

One such enzyme, Choline Acetyltransferase, has been identified as a key component in memory functionality.

With the global population aging and an expected exponential increase in Alzheimer’s disease cases, the stage is set for savvy market players to capture significant market share.

Data and analysis extracted from this press release must be accompanied by a statement identifying BCC Research LLC, 49 Walnut Park, Building 2, Wellesley, MA 02481, Telephone: 866-285-7215; Email: editor(at)bccresearch(dot)com as the source and publisher. Thank you.