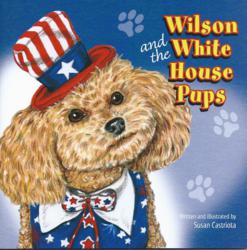 "If you want a friend in Washington, get a dog" President Harry S. Truman

The judges of the 2013 Purple Dragonfly Book Awards contest, which recognizes excellence in children's literature, have spoken. "WILSON AND THE WHITE HOUSE PUPS" by award winning author and illustrator Susan Castriota, has won a second-place award for Historical Fiction!

A complete list of winners can be found at Five Star Book Awards.

Of our 44 Presidents, 31 had dogs during their period of residency in the White House. "WILSON AND THE WHITE HOUSE PUPS", provides a wealth of information about the long and happy history of dogs residing with adoring First Families. Dogs certainly played a significant role in providing comfort, affection, and love, particularly during times of challenge for our country and its leaders. Readers have the opportunity to learn: which president's dog was the first to be photographed; which dog starred in 2 MGM films; which dog had a dog house patterned after The White House, and much more.The book has been extensively researched and is historically accurate. It has been edited by The White House Historical Association which also sells the book at its Washington, DC location. "WILSON AND THE WHITE HOUSE PUPS" provides a wonderful means for children to learn about history through stories of treasured animals.

As an added learning tool, children will love to see Wilson recite all of the U.S. Presidents in his YouTube video, Wilson and the White House Pups Book: http://www.youtube.com/watch?v=k4xzYNGTsYc&feature=player_embedded

Susan Castriota designed greeting cards of the White House and has enjoyed numerous visits to the White House, including being invited to dine in the private dining room. Her most memorable and thrilling visit resulted from having been asked to design an ornament for the 2008 White House Christmas Tree and attend a reception hosted by First Lady Laura Bush. She has met President George H. W. Bush, Vice-Presidents Dick Cheney and Al Gore. Every living U.S. President has received a signed copy of the “WILSON AND THE WHITE HOUSE PUPS" book, G.W. Bush, Bill Clinton and Barack Obama replied with a note and autographed photos.

The book is available at Wilsongetsadopted.com., Amazon, The White House Historical Assoc. The Smithsonian, The National Zoo, The Kennedy Center, and many museums and gift shops in the DC area.

"WILSON AND THE WHITE HOUSE PUPS" is part of the book series "Willie Wilson's Wondrous Tails" created by Susan Castriota. She has appeared on many TV and radio shows with an upcoming appearance on the Emmy Award winning show, THE DOCTORS.

Bella and Susan on THE DOCTORS show