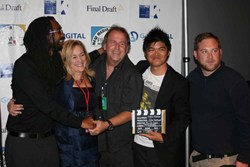 A place of vibrancy and mirthful creativity....In short, everyone loved every second of being at New Media Film Festival. Go Harrison 98.7FM

With 84 New Media Films from 17 countries, there was an eclectic array of programming across all sectors of New Media. The Awards Ceremony for 4th Annual New Media Film Festival took place at the state of the art theatre The Landmark in Los Angeles CA to honor the Best of Category winners and Grand Prize Winner in the year long submission process leading up to this critically acclaimed festival.

Judges are from all over the world include FOX, Pixar, The Caucus, Grammy Awards, Gemini Awards and other Industry Leaders.

http://www.NewMediaFilmFestival.com The Best in New Media....Honoring Stories Worth Telling announces these winners of the 4th Annual New Media Film Festival

Each entry is considered for Screening, Competition ($45,000.00 in Awards) and distribution. All of the winners will be offered non-exclusive distribution.

Watch videos from the live stream until July 10 2013 here https://new.livestream.com/randomhouzeproductions/newmediafilmfestival.

“So what is 'new media' exactly?
Festival founder Susan Johnston defines it as "infinite possibilities." While that may seem broad, new media is broad. It's a vast realm with ever-changing tools and techniques encompassing any emerging methods of producing, delivering, and viewing of content from now into the unforeseeable future.

The festival's categories might present the clearest picture of what new media can consist of. “ – Huffington Post

New Media Film Festival intersects the interactivity of new technologies & formats for Media & Cinema which exemplify the power of the cinematic arts to inspire and transform. A festival that Honors Stories Worth Telling that are created by people of All Ages-All Cultures-All Media.

The Best In New Media...Honoring Stories Worth Telling