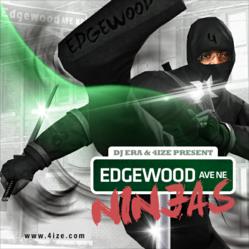 Due to the respect, hustle and work ethic that these two share, as well as the music scene in Atlanta, there wasn’t a second thought as to why they should collaborate.

Combining an acclaimed spinner and a lyrical beast can only create one thing – a masterpiece. DJ Era’s West Coast roots and 4-IZE’s influences from the West Side of Chicago will fuse with a Georgian twist to bring their fans an unforgettable experience. A worldwide debut is set for June 19, 2013, in which DJ Era and 4-IZE will release their new mixtape, Edgewood Ninja’s.

DJ Era has been a fan of 4-IZE ever since he heard him on Ludacris’ first album, Back for the First Time. “So when he asked me to do a mixtape I was very humbled and honored to know that twelve years after my debut, he still had the same respect for me as if I had just started rapping yesterday,” says 4-IZE. Due to the respect, hustle and work ethic that these two share, as well as the music scene in Atlanta, there wasn’t a second thought as to why they should collaborate.

To stay true to himself and his fans, 4-IZE decided to pay tribute to the streets with the title of the mixtape, Edgewood Ninja’s. “I’ve been working at Edgewood Pizzeria in the Old 4th Ward for almost two years and I wanted to do something to give back to the streets. Plus, its lots of ninjas on Edgewood that are true fans of my talent and skills” says 4-IZE.

There is definitely magic waiting to happen from this dynamic duo. “It’s only different because I’m different. I like to push the envelope and the boundaries of musical expression. Although I’m rapping on a few industry beats, I assure you that my level of ignorant intelligence makes this a standout project. [It will be] very entertaining!” says 4-IZE.

About GooseMogul Music and 4-IZE:
Represented by GooseMogul Music, one of the music industry’s premier artist development services & digital record labels; 4-IZE is well recognized for his animated character, incredible stage presence and mechanical rhyme flow. 4-IZE stands out from the plethora of rap artists and is one of the most entertaining hip-hop artists in Atlanta. Much of his notoriety comes from being featured on two 3x platinum Ludacris albums. 4-IZE bridges the gap between mainstream & underground artists everywhere.